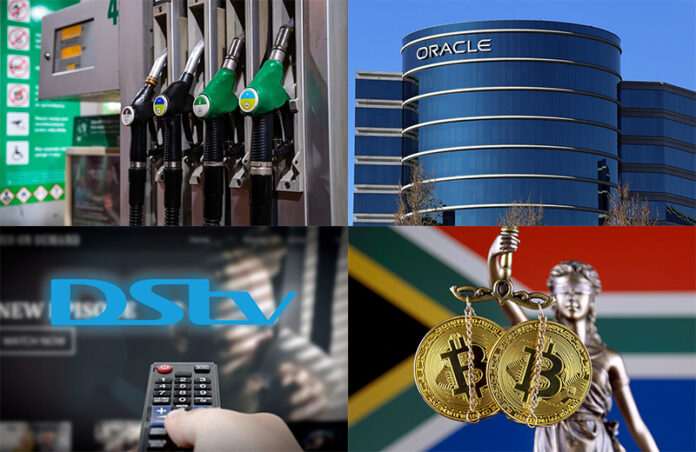 This week Bitcoin slumps, we ask what happens next. Is DStv poised to lose its exclusive sports broadcasting rights?

Oracle’s purchase of healthtech company Cerner gets the go ahead and the South African government says it will intervene in the country’s ever-climbing petrol prices.

4. Bitcoin – What Happens Next?

Bitcoin, and other cryptocurrencies, have suffered in the markets as of late. Perhaps crypto is just too unpredictable to really bet on, or perhaps the world’s top virtual currency will simply bounce back given enough time.

3. DStv’s Exclusive Sports Broadcasting Deals Could Be Under Threat

South Africa’s ruling party has launched a new proposal to implement widespread changes around TV broadcasting regulations in the country with a focus on the broadcasting of sports.

The most important amendments will see a ban being instated on selling exclusive broadcasting rights for sporting matches, with the party also planning to make matches involving national teams available for free, or at reduced cost, on the country’s public broadcaster.

Oracle Corporation has announced that all required antitrust approvals have been obtained for its proposed acquisition of American health ICT company Cerner.

South Africa’s Finance Minister Enoch Godongwana and Mineral Resources and Energy Minister Gwede Mantashe met during the weekend to discuss further intervention strategies to lessen the impact that the ever-increasing petrol price will have on the country in the next coming months.