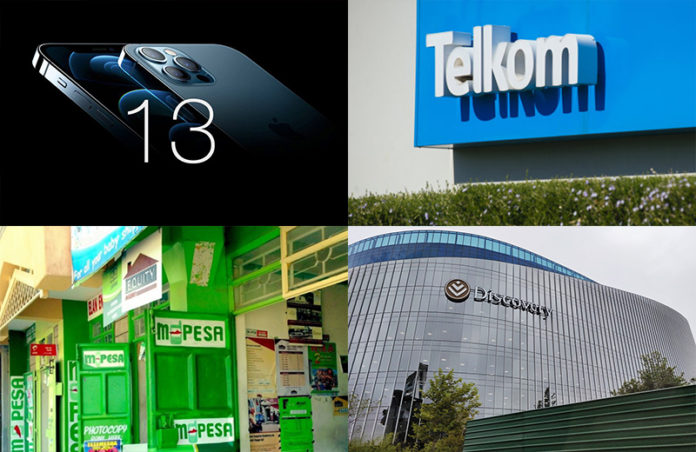 This week was marked by huge vaccine-related news in South Africa. After Discovery Health announced mandatory vaccinations for its employees next year, the company announced that it would reward its members for getting the jab.

M-PESA breaks records as the largest FinTech platform in Africa by the sheer size of the user base, Telkom slashes its data bundle prices in South Africa.

Finally, everything we know about the iPhone 13 launch.

4. Discovery Giving its Members 2500 Vitality Points for Getting Vaccinated

Discovery Vitality, a South African health insurance provider, has announced that it will be awarding members of its Vitality program aged 18 or older 2500 Vitality points for being fully vaccinated against COVID-19 in 2021.

These points will be awarded retrospectively in October for those who have already been vaccinated, and are equal to 25 days of exercise.

Safaricom’s mobile money service has officially reached 50-million active users across Africa, with a majority of its users in Kenya, according to an announcement by the telecom.

M-PESA is now, by the sheer size of its active user base, the most popular mobile money platform on the continent and the largest financial technology in Africa.

Telkom has cut the price of its 1GB + 1GB All networks data bundle to R79,00 from the previous price of R99.

The telco has also announced the introduction of a new 1,5GB + 1,5GB All networks data bundle at R89,00.

The bundles also include the benefit of additional night-surfer data that is available for use between midnight to 7 am.

The iPhone 13 is speculated to be revealed at Apple’s upcoming virtual presentation on 14 September.

This article goes over everything we know about the upcoming series of devices from the many rumours and leaks that have been circulating in the media.

Furthermore, the expected date of the iPhone 13’s release is 24 September 2021, with pre-orders starting from 17 September.