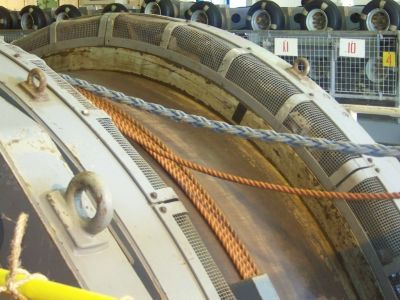 The much awaited East African Submarine Cable System (EASSy), which was expected to land at Mtunzini, KwaZulu Natal (KZN), South Africa, during the weekend, has finally landed this morning at 8.04am, an official told ITNewsAfrica.com.

Telkom’s spokesperson, Pynee Chetty, said the company Alcatel-Lucent, tasked with connecting the under-sea cables with the ones outside (off-shore) failed to do so over the weekend, however the cable landed this morning. The landing was planned initially for Saturday and was expected to be witnessed by Telkom officials and the media.

“The landing did not happen on Sunday as expected. The cable landed this Monday at 8.04am and work is currently in progress. It should take another 3-4 hours to complete the cable connection”, said Chetty in a telephone interview with ITNewsAfrica.com.

Telkom is a landing partner.

EASSy is a 10.000 km undersea cable system which will connect various parts of Sub-Saharan Africa to the rest of the world by 2011, mainly Europe and Asia.

Interconnection with other undersea international cable systems will enable traffic on EASSy to seamlessly connect to Europe, North and South America, the Middle East and Asia, thereby enhancing the east coast of Africa’s connectivity to the global telecommunications network.

It is expected that the success of EASSY will see telephone call rates and internet prices reduce drastically.

Telkom Managing Executive for Wholesale Services, Alphonzo Samuels, said EASSy was one of the elements of Telkom’s cable investment strategy and was a key step towards the process of establishing a Telkom fibre ring capability around Africa.

He said EASSy is routed from South Africa to Sudan, linking the coastal countries of East Africa.

“An extensive backhaul system linking landlocked countries to the coastal countries has been developed and is at various stages of completion”, stated Samuels, adding that EASSy is scheduled to be ready for commercial service by August this year.