Semi-private South African telecom and internet services provider Telkom says that this year’s municipal elections have been the most technologically advanced in the history of the Rainbow Nation.

The firm provides the voice and data network backbone for the Independent Electoral Commission (IEC), to allow for the collation and reporting of votes across the country, and this year Telkom has

“The people of South Africa are dependent on our connectivity to make their votes count. It all boils down to the technologies we deploy to service the electorate and the IEC, regardless of where voting is taking place” says Managing Executive of Converged Communications at Telkom-owned BCX, Prashil Gareeb.

“Telkom has been helping to bring democracy to the people since our first democratic elections in 1994. In that time, we have helped to facilitate six national elections and five municipal polls. We have come a long way over this time,” say Gareeb. 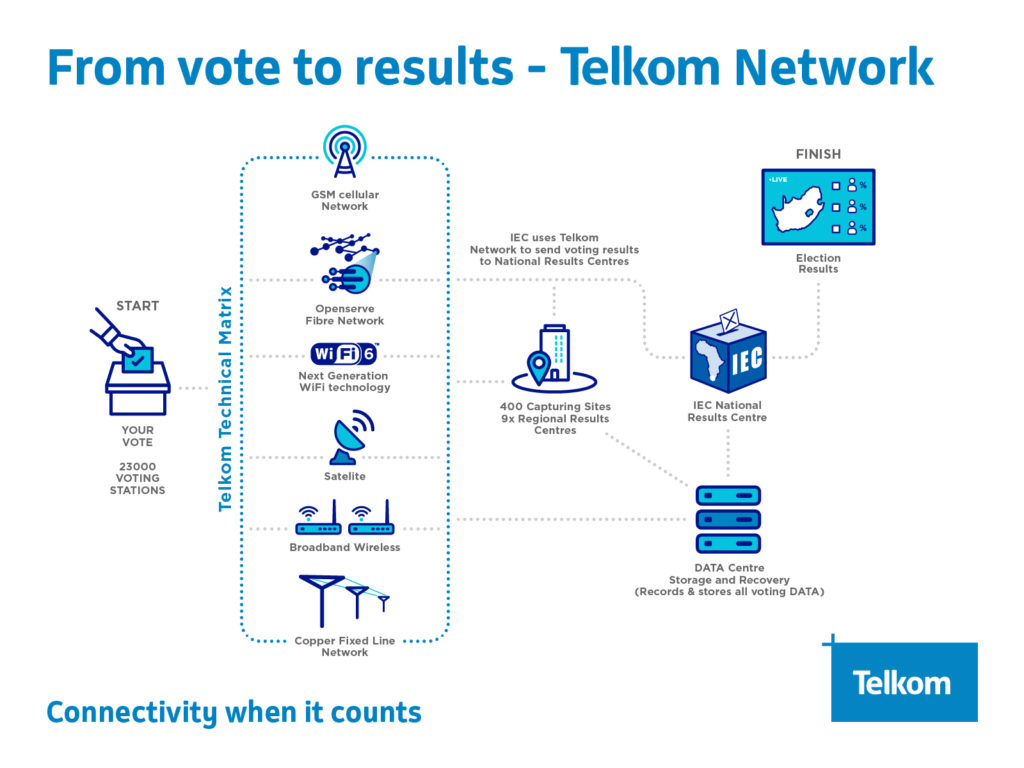 Neo Phukubje, executive for channel and business development at BCX Wireless, says this matrix of capabilities will guarantee that results are tabulated reliably, and data remains safe and secure.

“So, we deploy fit-for-purpose technology that is in line with IEC’s requirements, to ensure that they are able to fulfil on their mandates to give out the elections. So whether we’re talking about branch connectivity or we’re talking about secure networking for the different sites, we’ve included all of that, to ensure that we have the full elements to be able to provide a full-on architecture for the IEC,” Phukubje adds.

Phukubje continues to say that many of these technologies are revolutionary and will be used for the first time in the election process, such as high-speed networks, fibre and Wi-Fi 6 infrastructure – the latest generation of W-LAN technology, which supports download speeds of up to 9.6 gigabits per second – up from 3.5 Gbps.

“We are deploying also the Wi-Fi 6 infrastructure. which is the latest technology in wireless infrastructure that performs extremely well at peak network load, and this will be most helpful. During the election time, we will have multiple electoral officials, the security cluster, the media and a lot of public officials as well, all co-located at the sites”

Once votes have been cast, Telkom networks will securely convey counting and results-slip images for auditing and storage at the main results centres, with multiple-gigabit links of high-quality video also being streamed to the resident media agencies and the public.

Telkom technology has already helped to support an efficient registration process, which saw 1,7 million voters registered during the most recent two-day registration on 18 and 19 September 2021.