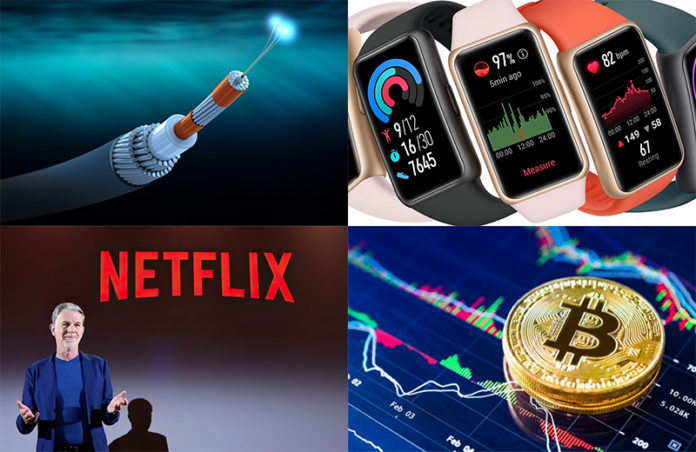 An enormous underwater mudslide cripples the internet. The South African government seeks to regulate Netflix and other digital streaming services, and how blockchain and cryptocurrency can increase financial inclusion in developing countries. Finally, the Huawei Band 6 round out this week’s most trending stories.

4. How Blockchain and Crypto Can Lessen Financial Exclusion in Developing Countries

COVID-19 has had many different effects on the world in general and the world of tech in particular. In this sense, it has sped up financial inclusion via mobile financial services apps provided by crypto, blockchain and FinTech startups.

Financial exclusion is one of the main causes of poverty, which is defined as the inability to access finance from mainstream banks. This is where blockchain and crypto come in, especially in places where banks may be unavailable and where cellphone penetration is high.

Gaining access to financial services through digital currencies can allow people to improve their standards and raise their household incomes.

A new white paper proposal from the Department of Communications and Digital Technologies is set to enforce locally produced content on digital streaming services, with Netflix zeroed in. The paper also seeks to apply other regulations to these services as well.

The white paper proposal suggests that the department will regulate up to 30% of the video catalogue that Netflix has available in South Africa.

Huawei’s Band 6 smartwatch is coming to South Africa, according to the Chinese telecom retail megacorp.

This new iteration of the company’s Band series of smartwatches comes will an all-new set of improvements and features.

A recent study conducted by Professor Peter J. Talling and a team from the Departments of Earth Sciences and Geography, from the University of Durham in the UK, co-led by Angola Cables has delivered important findings presenting valuable insights for the routing and protection of future subsea cables.

The cable fault on the SAT-3 cable that links Africa to Portugal and Spain was likely caused by an exceptionally large and powerful submarine mudslide that originated at the mouth of the Congo River, just 10 days after the Congo River recorded its largest flood since the 1960s.

It is believed that the underwater mudslide is the largest one ever recorded on Earth.