Hello #SouthAfrica! Customers based in ?? can now send money to friends and family in 145+ countries worldwide — as easy as sending an instant message.

Here’s Andrew Stewart, our MD for Middle East and Africa, sharing the news with @cnbcafrica pic.twitter.com/DCY3KYDjHS 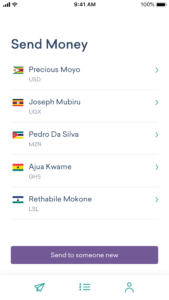 Using the WorldRemit app or website, customers can now send money as easily as sending an instant message to global destinations including Zimbabwe, Mozambique, the United Kingdom, India and Pakistan.

According to the World Bank, South Africa is the most expensive G20 country to send money from with an average cost of over 15% for sending $200 – more than double the global average.WorldRemit aims to bring this down to only 5% for its customers.

Currently, 68% of remittances from South Africa are sent through informal channels such as unregistered courier services (“malaicha”) and buses crossing the border.

WorldRemit’s low fees and exchange rates are shown up-front and senders from South Africa can choose from a wide variety of convenient payout options including bank transfer, cash pick up and mobile money.

For example, for customers sending to Zimbabwe, WorldRemit offers cash at over 200 locations – more than any other remittance service. Guaranteed cash is available through partners including Steward Bank, ZB Bank, Kaah Express and Quest Financial Services.

South Africa is one of WorldRemit’s top ten remittance receiving countries, with transactions to the country growing by over 50% YoY. This is according to Andrew Stewart, Managing Director for Middle East and Africa at WorldRemit.

“We are delighted to start this next phase of our growth, enabling customers in South Africa to send digital money transfers to 145 countries worldwide including Zimbabwe and Mozambique,” says Stewart.

With WorldRemit, customers can make quick, secure and low-cost money transfers directly from their phones. This eliminates the need to give cash to loved ones who are travelling or pay expensive fees to buses or taxis to transport cash across the border.

The service offers complete transparency because both senders and recipients receive notifications with details of how much money has been sent. Senders can also use the ‘track your transfer’ function to check the status of their transactions in real time.