Samsung has been teasing us with a foldable mobile for some time.

Now it appears that Samsung could be announcing something special at the same event. This latest hint follows another big announcement at CES, where Samsung’s director of product strategy and marketing, Suzanne de Silva, announced that the phones would arrive in the first half of 2019.

While the launch is taking place in San Francisco, Samsung had erected a massive billboard ad in Paris with some Korean text on it. It literally translates to “The future unfolds” and “February twentieth.”

This is a clear hint of a foldable phone and it will be revealed on, the same date as the upcoming Galaxy Unpacked event.

Related: Samsung Galaxy S10 will be revealed in February

In case you missed it, Samsung had demonstrated its concept foldable smartphone during its developer conference late last year. It features two screens — one on the outside which acts like a normal smartphone screen and another on the inside that folds right in the middle. The screen is called the Infinity Flex display and the device will offer app continuity and multi-active window. 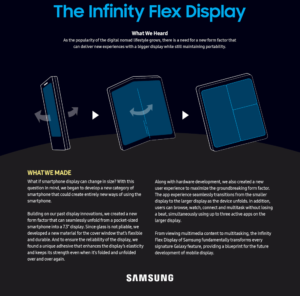 With this latest development, it appears that Samsung will be announcing a total of four smartphones this year. Apart from the foldable device, there will be three Galaxy S10 models that come in different screen sizes.