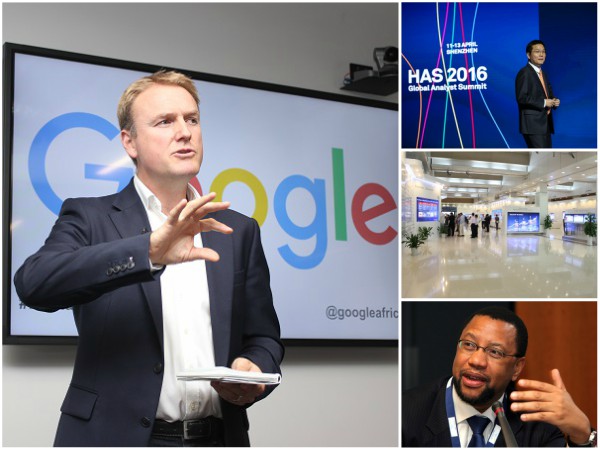 Huawei set to accelerate Digital Transformation for a better connected world
Huawei convened its 13th Global Analyst Summit in Shenzhen, China. The event brought together over 500 analysts and business leaders from the telecom, Internet, finance, and other industries. Focusing on the theme of “Growing Together Through Digitalization and Building a Better Connected World”, Huawei will fully elaborate on its corporate strategy, which aims to move towards a Better Connected World. Read More.

IDC reveals new regional research center in Egypt
International Data Corporation (IDC) has revealed the opening of its dedicated new office in Cairo’s Smart Village. The firm says a number of analysts and consultants are already on board and that recruitment efforts are continuing after today’s formal inauguration at the IDC Egypt CIO Summit 2016, which took place at The Nile Ritz-Carlton Hotel under the patronage of H.E. Yasser El Kady, Minister of Communications and Information Technology. Read More.

Google to train 1 million people in Africa in digital skills
Google had, at a press conference in Johannesburg, announced its commitment to train one million young Africans in digital skills in the next year. In realising this commitment, Google is supporting its partner Livity Africa to run two training programs: ‘Digify Bytes’ to give digital skills to young people looking to develop a digital career; and ‘Digify Pro’, a 3-month immersion program for digital specialists. Read More.

MTN attempts fine resolution amid CEO exit
MTN Group will attempt to strike a deal with Nigerian authorities over the NGN 780 billion fine imposed on the company back in 2015. Read More.

African devs take the stage at Facebook’s F8 conference
Facebook revealed that at its annual F8 developer conference, which was held in San Francisco on 12 and 13 April, the company had partnered with many African developers to launch products for the global market. Facebook, with its global reach and scale, is including African developers in its beta testing programme for the launch of new global products and features as it increases its presence and deepens its partnerships on the continent. Read More.

Magnetic Wins iProspect & Isobar
Magnetic recently reveled that it has won iProspect and Isobar and has officially been appointed as their management platform of choice. This is a sizeable win for Magnetic as these agencies are two of the global Dentsu Aegis Network’s six brands. Read More.

Mobile technology can set the world ablaze with innovation and opportunities
The World Bank’s Global Findex financial inclusion study shows that 12% of adults in sub-Saharan Africa have mobile money accounts – compared to just 2% worldwide – and of these 64 million adults, 45% of them have only a mobile money account. Read More.

Making supply chains digital in Africa
Different to the tourism or marketing environments where digital integration has been absorbed organically, supply chain and manufacturing professionals have been sluggish to phase out what is a deeply entrenched traditional mentality. Read More.

What is the difference between whaling and phishing?
One of the largest online security threats to individuals and businesses today doesn’t come from new sophisticated malware tools, but rather from distinctly low-tech phishing and whaling campaigns. Read More.

Forget the Smart City, time to think about the smart Smart Citizen
By 2050, it’s expected that nearly 80% of South Africans will be living in urban areas. This massive acceleration in rural-to-urban migration was highlighted recently by Co-operative Governance and Traditional Affairs Deputy Minister Andries Nel. Read More.

SA online retail to pass 1% of total retail in 2016
For the first time since the dawn of e-commerce in South Africa, online retail in this country will reach 1% of overall retail during 2016. This is the most significant finding of the Online Retail in South Africa 2016 report, released today by World Wide Worx. Read More.

Huawei Mate 8 launched in South Africa
At the launch event Charlene Munilall, General Manager for Huawei Consumer Business Group SA stated that: “The Mate 8 represents the pinnacle of style, innovation and ground-breaking technology that introduces a new style of business. The Mate 8 has set a new standard in style that transcends its beautifully-crafted exterior to deliver a mobile companion that meets the needs of today’s always-connected and sharing user.” Read More.

Huawei unveils P9 smartphone
Huawei Consumer Business Group has unveiled the company’s latest device, the P9 Smartphone. The latest device from Huawei has been created in partnership with Leica Camera AG and is, according to Huawei, the world’s first Leica dual-camera smartphone. Huawei also used the launch event, which was held in London, to introduce its new B3 Talkband wearable wristband. Read More.

South Africa: LG G5 launch date and pricing revealed
As revealed by LG Electronics (LG) at a press conference held in Johannesburg, the company is expecting to launch its latest device – the LG G5 Modular Smartphone – from the 15th of April 2016 in South Africa. Read More.

SEGA Mega Drive Classic Game Console Review
The SEGA Mega Drive Classic Game Console, also known as the Sega Genesis in North America and the Super Aladdin Boy in South Korea, has made its way back to the South African market. Now for those of you who grew up in the late 80s and early 90s will know the original SEGA Mega Drive featured some rather iconic video games titles, which included the likes of: Sonic the Hedgehog, Streets of Rage, Golden Axe, Crack Down, Altered Beast, and Mortal Kombat 1, 2, and 3. Read the Review.