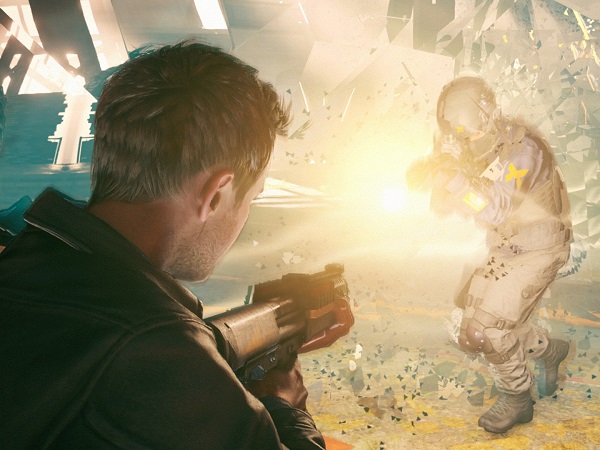 Developed by Remedy Entertainment and published by Microsoft, Quantum Break is the latest exclusive to hit Xbox One consoles and PCs worldwide. While the title is set only to release on 5 April 2016, we have stepped into the shoes of Jack Joyce, manipulated time, and dropped our review – which can be found below – ahead of the release date.

Quantum Break, which has been developed by the creators of Alan Wake and Max Payne, is a rather ambitious game at that. Not only does it include a start-studded cast of Hollywood actors, but it also features a rather intriguing storyline that has been coupled rather well with a live-action tv show.

Among the stars are Shawn Ashmore, who plays the role of protagonist Jack Joyce – a man who gains the power to manipulate time through an experiment gone wrong. Aiden Gillen, who plays the part of antagonist Paul Serene, a man who assists in making said experiment go wrong. Also included in the highly talented cast are the likes of Dominic Monaghan (William Joyce), Brooke Nevin (Emily Burke), Lance Reddick (Martin Hatch), and a personal favourite, due to his fantastic role within Quantum Break’s live-action show, Marshall Allman (Charlie Wincott).

With a star-studded cast intact, Quantum Break takes gameplay and live-action and combines it into a fantastic thrill ride that rarely dissapoints. During gameplay the story essentially focuses on the game’s protagonists… while the live-action show focuses more on the antagonists. This brings a great balance to this title as gameplay segments are indeed lengthy and so are the live-action episodes – which have a rough run time of around 22 minutes each.

Before the live-action show commences, the player will take on the role of Paul Serene in order to decide where the storyline will go next. As Paul Serene has the power to see the future he must either choose the route that best suites Monarch, the evil corporation featured within the game, or path that could possibly assist protagonist Jack Joyce in gaining new allies and an upper hand. A perfect example of this can be seen in the video below.

Once the chosen path is decided, key characters – in-game – will either live or die. This makes Quantum Break a title that is well-worth playing though a couple of times. Overall, the live-action show featured within Quantum Break is superb when it comes to cast and production value; however, it tends to end rather abruptly, which leaves many character story arcs being abandoned and a number of questions unanswered. Perhaps Remedy Entertainment may fix this issue with upcoming content, which would be a great way to capitalise on potential upcoming DLC content.

Moving away from moral choices, Quantum Break features some rather impressive gameplay mechanics. Controlling time, in-game as protagonist Jack Joyce, is a fairly simple process as the game offers up simplistic tutorials to get you going. Throughout the game Jack Joyce will continually obtain new time manipulation powers which will assist him in his fight.

Powers such as Time Vision will allow Jack Joyce to see enemies through objects as well as identify certain points of interest. Jack will also gain the ability to reverse time in order to complete various different puzzles, which are unfortunately rather simple and easy to overcome. To add to the lineup of powers Jack will also be able to dash and perform some rather visually impressive take-downs.

To put things into perspective, without these powers Quantum Break would essentially be your run of the mill third-person-shooter; however, with them Remedy Entertainment has made a title that is indeed one title that uses these powers to their true potential… rather just making them a gimmick to persuade gamers to pick up their title. When it comes to difficulty, Quantum Break does offer players the traditional easy, medium and hard mode. Our suggestion would be to play Quantum Break on either medium or hard.

This essentially allows the player to use the time powers featured within the game to their true potentially. When selecting the harder modes combat becomes tense and thrilling. Enemies don’t stay static, and often move freely around the battlefield. You will find yourself in tight situations, where enemies will be approaching from all angles… This is where your Time Shield, Dash, and Melee Take-Downs come in handy. To add to the thrill of the fight, there are tons of guns lying around to use against your enemies. Additionally, players can also – for a limited duration – stop time around an enemy and essentially stack up bullets… once time kicks back in the stacked up bullets will them take down the enemy.

Conclusion:
Remedy Entertainments Xbox One exclusive “Quantum Break,” is a great game overall. The live-action show takes things to a completely new level when it comes to storytelling and narrative – just a pity it concludes so abruptly – while the in-game mechanics provide a rather intense gameplay experience.

In conclusion, Remedy has introduced us to a fantastic game overall; however, it would be fantastic to see the team improve upon the live-action series as well as certain gameplay mechanics and puzzle solving mechanics in upcoming DLC.