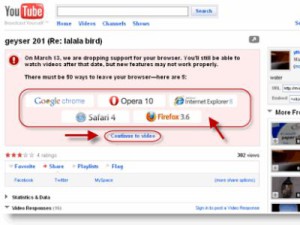 “Support stops on March 13th. Stopped support essentially means that some future features on YouTube will be rolled out that won’t work in older browsers”, writes mashable.com.

YouTube will notify its users of the change in browser support by displaying a message every two weeks, until the user upgrades, while suggesting viable alternatives like Google Chrome, Firefox 3.6, Opera 10, IE8 or Safari 4.

Users will still be able to watch videos after 13 March, but new features may not work properly.
Google’s YouTube decision to drop IE6 support is part of the company’s strategy to phase out the old browser and encourage better browser support for new developments. The company will not support IE6 anymore for Google Docs and its site as of 1 March 2010.

More web-based companies like Facebook and Digg have started to ditch the old IE6, because of its inflexibility and potential security risks. It is estimated that 15% to 25% of the world’s population still use Internet Explorer 6.