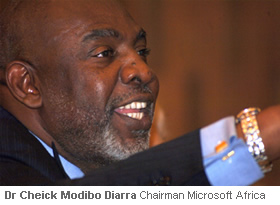 Microsoft Africa chairman, Dr. Cheick Diarra, has vowed to empower as many as 45 million people on the continent with ICT by 2010. He expressed a wish to leave a legacy of having provided technology to the most remote areas of the continent.

The Microsoft chief said that his organization made a pledge in 2006 that by 2010, 250 billion people across the world would benefit from Microsoft initiatives, of which 45million would be from the African continent.

“We made a pledge in Cape Town in 2006 that 45 million Africans will benefit from our mission to provide technology to the people.

“The strategy we have adopted is train the master trainer who will in turn pass skills to learners. My team has indicated that we might actually train more than we envisaged at the rate we going,” Diarra told ITnewsAfrica.com last week.

Dr. Diarra also acknowledged that whilst there was progress they had encountered major challenges such as power shortages.

“Power is a problem and we need to work with our innovation centres to develop power solutions to address these challenges,” he said.
Dr. Diarra said his organisation was already doing a lot to develop ICT across Africa. Microsoft Research, in partnership with TWAS (The Academy of Sciences for the developing world) and AAS (the African Academy of Sciences), is already supporting two new programmes designed to recognise and assist scientists working in Africa in the field of computer science.

The Microsoft Award for Young Scientists will recognise young scientists in Africa whose research in computer science promises to have a positive impact in the developing world. Each year, three winners will be selected from different countries on the continent. Scientists who have received their degrees within the past 10 years will be eligible and each recipient will receive a €7,000 cash award.
Microsoft Grant for Scientific Meetings in Developing Countries aims to encourage the organisation of international and regional scientific conferences and workshops in Africa. Microsoft will provide support in the form of travel grants for some principal speakers from abroad and/or participants from developing countries other than the country in which the event is held.
Applicants of any nationality, may be involved in the organisation of international or regional scientific meetings to be held in Africa in the field of computer science.
“To achieve the Millennium Development Goals, Africa must create knowledge- and skills-based wealth,” said Dr Diarra. “The prosperity of the continent is dependent on African small and medium enterprises relying on results from research and development. They can then develop locally relevant solutions and value-added opportunities that will lead to the accelerated industrialisation of Africa.”