TECNO Mobile, a Hong Kong-based smartphone manufacturer which was also the top smartphone seller in all of Africa in 2020, recently released its TECNO CAMON 17P device in South Africa.

The company describes the device as for those who “require smartphones able to produce sublime photographic and video content that can be shared extensively on their social channels.”

TECNO kindly provided a model of the TECNO CAMON 17P device for IT News Africa to review:

The Camon 17P comes equipped with an 8 inch FHD+ IPS LCD screen – it’s massive – capable of 500 nits of brightness and rendering images in 1080/2460 pixels. The visual quality is fantastic. You won’t be missing out on any fidelity with the 17P, and the streaming quality is terrific across YouTube, social media and Netflix (Just make sure you keep the device updated. I had some issues with screen lagging on YouTube right before the latest update.)

Images are crisp and vibrant with a tinge of increased contrast and saturation. Enough to make colours pop but not too much that it hurts the eye. The HIOS, the Android-based operating system that runs the TECNO CAMON 17P, comes equipped with visual flourishes that really make the display shine. The battery-recharging screen is a treat that I will often look forward to and the device cleaner app uses a short visual of a rocket ship that honestly makes one want to clean their phone every day of unnecessarily stored data.

I reviewed the Spruce Green model of the device which is an oddly calming colour, the gold-metal finishes on the device logo and camera setup fit well with the olive-y green. The device’s massive LCD screen also means that it is a long phone and often it can be a bit of a hassle to reach across the screen when navigating with a single hand, though this is a very minute problem. 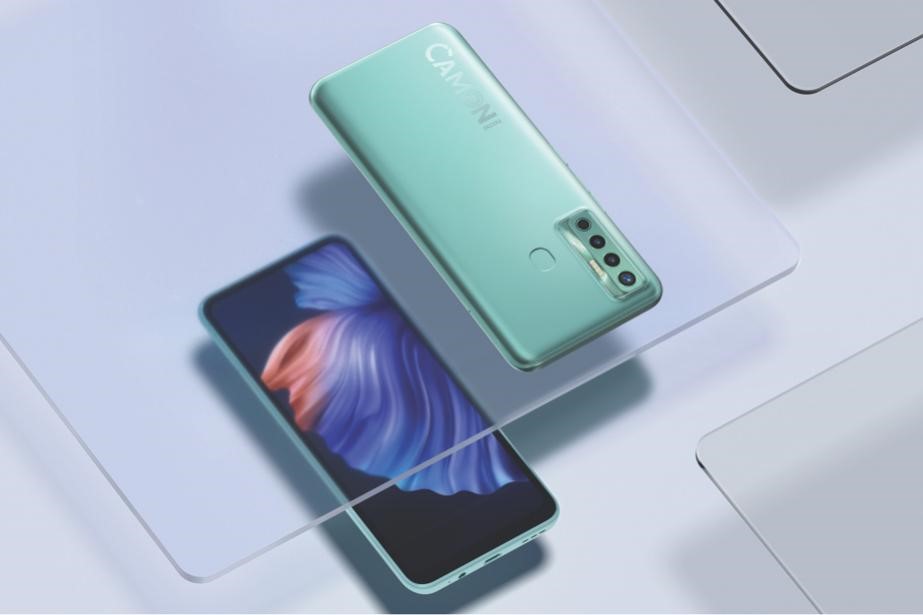 Its side-mounted fingerprint scanner is, however, by far the worst and most annoying thing on the hardware side. The incredibly sensitive scanner notices your fingerprint whenever you pick up your device since it is mounted near the middle on its right edge. This causes the device to occasionally freak out and go into fits of just vibrating in your hand – two or three bursts of vibrations at a time. Worse yet, it often fails to pick up my fingerprint when I want it to like when I want to supersede the phone lock.

Perhaps a better position for the scanner would alleviate some of these issues, or a less sensitive scanner would help in mitigating issues when trying to access the device.

According to TECNO, the 17P has the company’s “fastest chip yet” – a MediaTek Helio G85. The device runs on an 8 core CPU and takes advantage of a Mali-G52 MC2 for graphics rendering. It runs on a generous 6GB of RAM and has a lofty 128GB of storage space. For the retail price of the device, this setup is honestly quite lavish. Navigating on the phone, using and multitasking across apps – what I would refer to as general, everyday use – is 95% seamless.

Sharp-eyed users may notice some performance glitches occasionally but in terms of speed, the device doesn’t so much as purr but rumbles through obstacles. Almost as if it is desperately trying to churn out better performance from its hardware.

The previously mentioned HIOS – a TECNO-patented version of Android 11 OS – is best when you don’t notice it. When you first open the device, you may be overwhelmed by the bloated selection of apps and the torrent of initial tutorial messages and permission requests, while appreciated, can be a bit much for users who are excited to get going on the device.

Some of the apps included on HIOS seem almost unnecessary. I have yet to even touch apps like Freezer, which prevents other apps from loading in the background, after a few weeks of sustained use. I simply haven’t needed it, and you can’t delete it from the device.

The TECNO CAMON 17P camera setup is the company’s predestined and underlined star for the device, and it shows. Its four lense rear-mounted main camera (AI-enabled quad-camera) includes a 64MP camera for everyday purposes, as well as a 2MP macro lense and a 2MP depth-sensing lense.

Image quality in the main camera is notably impressive (at least one person I know has commented on how good the pictures look). The camera setup is odd as it manages to capture really small details and brings them to the fore, improving image quality but in some cases, I’m left wanting sharper images and I’m not sure why.

The AI-enabled setup, automatically transitioning between lenses when in low light, or bright light, for example, is a nifty feature that would be missed even if it wasn’t there. The CAMON 17P uses next-generation TAIVOS (TECNO AI Vision Optimisation Solution) 2.0 to optimise the camera settings based on the user’s scenery changes.

Its single 16MP selfie camera, capable of capturing video in 1080p snaps images in impressive quality, even in low light environments. A solid camera setup for the 17P makes sure that users won’t be missing anything in this regard.

Strong, long-lasting battery life is a key feature of the TECNO CAMON 17P. Even after two days of sustained “everyday” use, the device can motor on without needing to charge. I don’t think the device has ever once run out of battery during the review period, and one week I didn’t charge it for two days (Don’t do this).

When users do remember to charge to the device, its Li-Po 5000mAh 18W Flash charging battery means half an hour on charge every day is all you will ever really need. Even down to 15 minutes if you want to just get up and go. The battery becomes a non-worry with the 17P, just like it’s supposed to be.

Retailing at R4,999 (RRP) and available at all outlets that sell official TECNO products, the TECNO CAMON 17P is definitely punching above its weight limit. For users who want a virtually no-nonsense experience, with a few hiccups here and there, the 17P is hard not to recommend, especially for its price.

It’s a shame that small issues with the device like a bloated OS experience and the side-mounted fingerprint scanner (which is very unwieldy) dampen what could be a really great, really easy to use device.

The TECNO CAMON 17P rests very comfortably right on the cusp of greatness, and perhaps with a bit of tuning, TECNO could produce a device that hits all the right notes in the future based on the 17P.