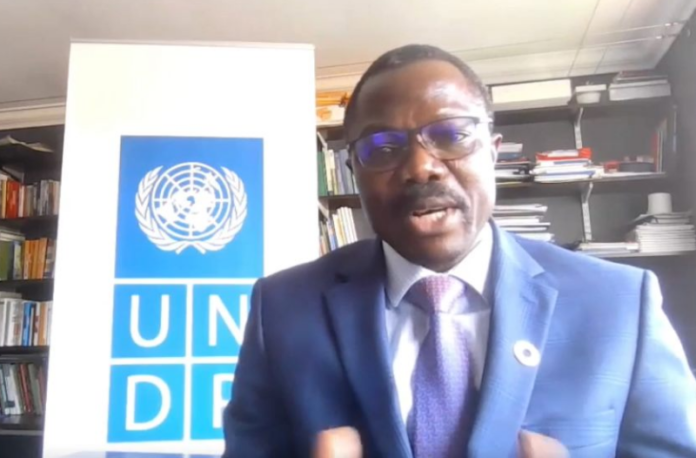 Africa Tech Week has officially kicked off. The two-day virtual summit hosted a galaxy of out-of-this-world speakers, including the panel discussion by Marian Croak, VP of engineering at Google and Lindiwe Matali founder and CEO of Africa Teen Geeks.

Marian and Lindiwe delved into how important it is for individuals, especially young girls, and women to have mentors.

Marian motivationally advised that one should “find a sense of strength within one’s self and reiterated that if you are not failing you are not learning. Yemi Keri, CEO of Heckerbella and co-founder of Rising Tide Africa, was quoted saying that, “the more female investors we get on the continent the more we will reduce the funding gap for female entrepreneurs.”

Yemi also spoke on the reasons investment in Africa is a golden opportunity. This is because the continent has the most youthful population in the world, and are the early adopters of tech, making for incredibly fertile grounds for investors.

Ayodele Odusola, resident representative of the united nation development programme shone a light on the notion that Africa is not only an incredible market of the 4th industrial revolution but a major player in it.

As Bradwin Roper, CEO of FNB Connect, stated, “bridging the digital divide is more important now than ever. 4 Billion people are still not connected!”

Regarding how to combat the digital divide, Marian Croak eloquently stated that “It’s going to take the government, private corporations, policymakers, and the education system coming together, in a collective way, to solve this problem.”

Marian maintained that access to the internet and technology should be a universal right, as it is a fountain of knowledge. Dr Anino Emuwa, also commented on the digital divide, stating that collaboration is a solution.

Ashish J Thakka, group CEO at Mara Phones stated that “being digital is no longer an optionality, it is an absolute necessity”. Roper also reminded us that although technology is both fascinating and interesting, it is humans who make technology come alive. Marian reiterated that innovation is a mindset, not a skill or a talent, but something that you have to turn on in your mind.

The incredible panel discussion hosted by esteemed sponsor PPC on decoupling economic growth from resource generation, made great strides using solution-oriented conversation. On the panel Snowden Mmadi, Infrastructure Expert at the African Union Development Agency (AUDA-NEPAD) was quoted saying, that the African continent is “now on the move in making sure we are using our resources sustainably”.

Acclaimed sponsor Gijima hosted a panel discussion on unlocking Africa’s economic potential through digital transformation, in which it was discussed that a good way to harness Africa’s Economic potential is through collaboration.

“None of us is as good as all of us” according to Shubna Harilal, MD of Gijima Technology. The crux of the matter is that only Africans are going to change Africa, and in doing so, serve as inspiration for the rest of the globe.

Collaboration is key for Africa’s growth

ATW hosted attendees from across the continent today, including delegates from Kenya, Nigeria, Botswana and Ethiopia. A cross-sector of companies attended over 41.5% of them looking to build partnerships through networking including Kelloggs, ABSA, Google, IDC, Google, CTICC, Ogilvy, FNB, Sanlam, Naked Insurance and hundreds more.

The resounding sentiment from day 1 at Africa Tech Week was that “All of us have to really be proud and take advantage of the fact that we are African and this is our time.” – Ashish J Thakkar