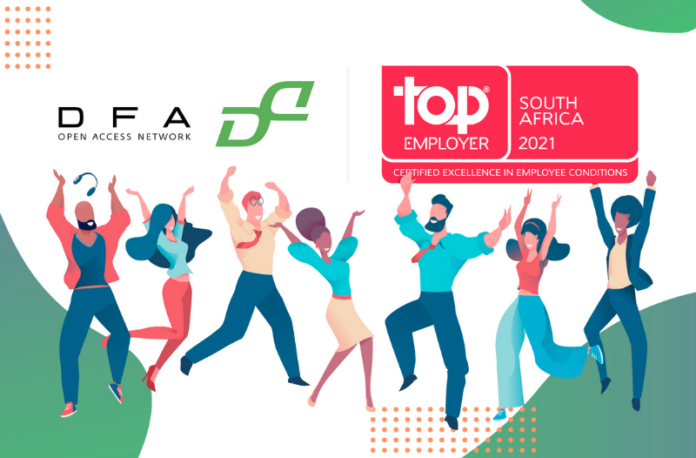 With headquarters in the Netherlands and offices in several countries around the world – including South Africa – Top Employers Institute was established with the aim of promoting excellence in human capital management to support business strategy.

DFA CEO, Thinus Mulder, said that achieving the certification was the culmination of a years-long, concerted effort to align DFA with global HR best practice to attract and retain the best skills in the market. ‘The technology industry requires some of the scarcest skills,’ he said, adding that DFA wanted not only to attract the best but also to develop its people in the best way possible. ‘The process helped us to identify those factors that are critical to employee engagement and development and apply them throughout the organisation.’

This effort was led largely by the company’s Human Capital Officer, Portia Thokoane. Thokoane said that human capital had become increasingly acknowledged as a critical business differentiator, and DFA believes that those organizations that give adequate attention to this area of their businesses will continue to distinguish them from those who do not. ‘DFA places a high value on its human resources. Our employees are truly assets that we need to nurture. The business environment continues to change rapidly, and our fingers must remain on the pulse of what affects their well-being,’ Thokoane added.

The certification is by no means an indication that a company has reached an end goal. Once certified, companies are re-evaluated annually and must maintain these standards to retain their Top Employer status for another year. In addition to awarding this recognition, Top Employers Institute also empowers employers with insights into areas such as performance management, workplace mentorship, career management, and people at work.

Thokoane sees the annual process to retain certification as an opportunity for companies to strive for continuous improvement in an ever-changing world of work. For example, the institute’s latest report found that, spurred on by a number of global social issues, companies were investing more and more in diversity and inclusion, while there was a marked focus on digital transformation as a result of the COVID-19 pandemic.

Highlighting DFA’s own experience’s over the period, Mulder added that the company had had to focus on supporting employees over what was, for many, a difficult time. Measures were put in place to make sure that no employee felt isolated while working at home.

‘We reminded employees to take breaks and spend time with family. We also established a counselling line for those who suffered any adverse effects on their emotional well-being during the lockdown periods,’ he explains.

Thokoane added that DFA’s achievement added to the number of ICT companies in the Top Employers list and that she hoped that this would help attract talent not only to DFA but also to the industry as a whole – and stem the brain drain. ‘This is critical, particularly as we move forward into the digital era,’ she concluded.