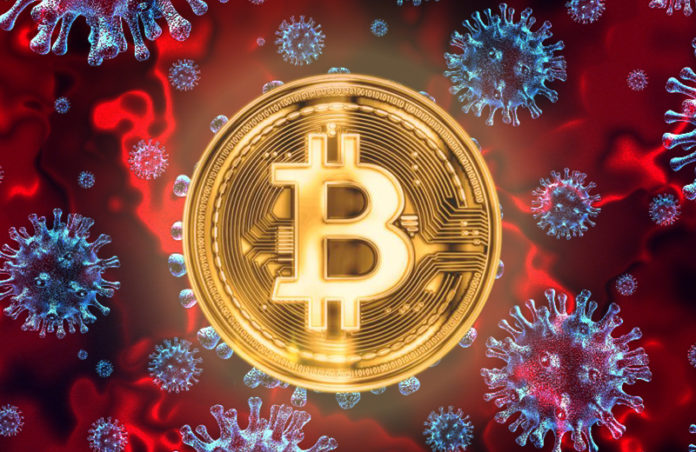 Bitcoin’s price slumped by as much as half as the global economy comes to grips with the COVID-19 pandemic. Dropping by about 48% between 22 January and 22 March – this time Bitcoin has undergone more chaotic flux, even managing to hit 2020’s all-time high – having started the year at $9,300. Many have attributed Bitcoin’s drop as repercussions of the massive market panic that began by the end of February.

Based on Bitcoin’s current performance, investment narrative that the cryptocurrency was starting to become a sort of safe-haven asset in a similar styling to gold is far from coming into fruition. This does not mean that Bitcoin will not achieve this status at some point in the future, however.

Investment narrative that Bitcoin was starting to become a sort of safe-haven asset in a similar styling to gold is far from coming into fruition.

An observation by Inside Bitcoin‘s comparison on withstanding the effects of COVID-19 interestingly saw that Bitcoin (BTC) is currently two-times and three-time better when compared to S7P 500 (SPX) and Crude Oil (USOIL), respectively.

“During this period, Bitcoin has a -19.2% decline on the YTD chart followed by the S&P 500’s -34.3%. On the other, Crude Oil is the most affected with -64.57%. Elsewhere, Gold is the only asset with positive performance after gaining by 0.13% during the period,” write Inside Bitcoin.

Unfortunately for BTC traders, all the gains Bitcoin had made since the beginning of the year have been wiped out, dropping to 2020’s low at $4,987 from the highest of the year at $10,334.

Bitcoin’s crash is a reflection of the turmoil the virus is wreaking on the traditional markets. Apart from the global economic turmoil, the coronavirus has seen more than 300,000 confirmed cases worldwide, and about 15,000 deaths. Anxiety about the future has seen the global stock markets and cryptocurrencies embroiled in a storm of chaos.

Lockdowns are being placed on countries across the globe, which means less retail trading, less buying, and less business in both stocks and crypto sectors.

Inside Bitcoin states that “Amid the coronavirus crisis, most financial markets globally have repeatedly crashed as a result of fear and panic tied to the economic effect of the virus. In some cases, the plunge has been by more than 10%. During this period circuit breakers were triggered. In most financial markets circuit breakers are triggered when overall prices drop by a certain magnitude.”

While world governments are contemplating clocking the market full until the pandemic ends, the same cannot be said or done for BTC, as it is traded all year round, 24/7.

Experts, like Binance CEO Changpeng Zhao, believe that Bitcoin’s crash is not due to the COVID-19 pandemic. He notes that even though the pandemic has led to the global economic meltdown, the effects felt in the cryptocurrency sector indicate that the world’s economy is too weak.

Going into the future, there might be further price drops as the entire global economy comes to grips with the coronavirus. However, the current fear and panic may hit peak levels as people anticipate more lockdowns.