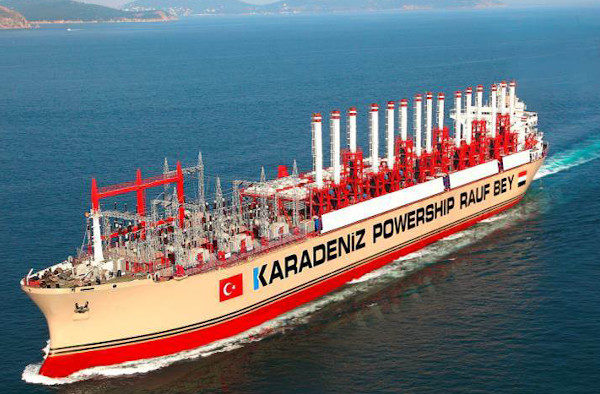 One of the world’s largest powership firms, Karpowership has submitted a proposal to South Africa. This new plan seeks to effectively “plug” the power deficit the country is facing, upwards of 3,000MW, Reuters reports.

“We have made a submission to the department as of last Friday and they received information on what is possible, where and how we would look to do it”, says Patrick O’Driscoll, Karpowership’s director of Global Sales. He continues to say that several injection points have already been identified by the company in order to pump the grid with power.

Karpowership is currently providing about 4,100MW of electricity to nations in the Middle East, Asia, eight African nations and even Cuba. This massive undertaking is conducted by its fleet of 25 powerships. An excess of 4,400MW worth of new ships is also in plans to be constructed at their Turkey shipyard.

Each ship can supply a country’s power grid a range of power options from 30MW to up to and around 600MW and for as long as they are contracted. O’Driscoll also says “speed of delivery” is their most important focus, and that they had recently operated a 120MW contract in Senegal within nine weeks.

Most importantly for the cash-strapped Eskom, is that these powerships can run on many different fuels, the usual being natural gas and even liquefied natural gas which is cheaper than diesel – the source of fuel that Eskom spends millions of dollars annually to supply.

“I can give guarantees and assurances that Karpowership will be significantly less, maybe even half the cost of those peakers”, Reuters quotes him on Eskom’s open-cycle gas turbines.

Imagine them as small, privately-owned floating power stations that moor off the coast of a country and generate backup power. They are designed to supply power 24-hours a day, seven days a week. The electrical supply is managed on-board, with a sophisticated control room that matches the control facilities of any high-end modern land-based power station.

Powerships generate electricity in a number of high power alternators in their hulls, which are fed by fuel lines that lead to fuel storage tanks from the respective harbour’s storage facilities. Each ship also has a backup fuel tank on-board to prevent any unnecessary power interruptions.  A few ships off the coast of South Africa could effectively eliminate the need for load-shedding, EE Publishing writes.