Earlier this year, Honor, the smartphone e-brand of the Huawei Group, has made its debut in the South African market with the launch of two new smartphones.

This week, the company unveiled it’s 8x flagship and announced its intention to become one of South Africa’s top three smartphone brands by 2020.

The Honor 8X is the latest in a batch of new mid-range devices that have entered the country of late, which should make it interesting to see how it performs against the likes of the new Galaxy A7 and Galaxy A9 from Samsung, not to mention the Huawei Mate 20 Lite.

“With the newly unveiled Honor 8X, Honor is setting out to hit new benchmarks in terms of balance between value, design and performance. We have launched a device that enjoys flagship features at a budget friendly price to cater to our digital natives, the millennials. We know that millennials are super tech-savvy and that is why we have maxed out all the features found in a flagship and wrapped a price tag on the Honor 8X that does not burn a hole in their pockets,” said President of Honor MEA, Mr. Chris Sunbaigong.

In terms of features, the Honor 8x shows off a 6.5″ Full View display up front, with industry standard screen notch. Added to this is a dual camera (20MP and 2MP) setup on the rear which employs an AI system for scene and object detection. 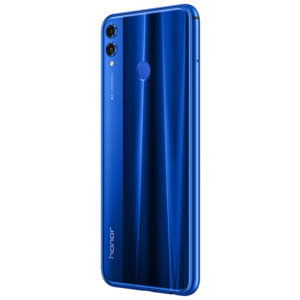 It also features intelligent power saving technology and a 3750mAh battery, which can last for more than one day on a single charge.  Additionally, the power-packed configuration under the hood guarantees a fast and smooth user experience. Not to mention, the sizeable battery makes sure that usage remains uninterrupted for a long time.

Honor 8X deploys the latest in AI Communications. If a person is in a noisy environment, such as on the subway or in brisk wind, the smartphone will recognise the background noise and enable AI noise cancellation to improve voice quality and enable clearer conversations. AI Communications can also detect variations in signal strength, such as in an elevator, quickly restoring 4G connections to maximum speed right after you leave the lift – users won’t miss a thing.

The device wont be sold on digital channels just yet, but it will be available through retail stores from 26 November at R5499.