These notes will cover all denominations – R10, R20, R50, R100 and R200. As part of the celebrations, the South African Mint, a subsidiary of the SARB, will also be issuing a new commemorative circulation R5 coin.

As part of the preparations for the launch, test packs of the commemorative banknotes were made available to members of the broader cash industry to allow them to make adequate preparations in relation to issues such as adaptions of cash processing and cash dispensing machines, ticketing machines and so forth. 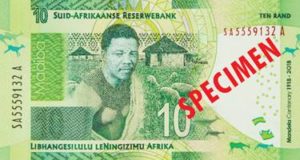 While these test packs were governed by strict confidentiality provisions, it has come to the SARB’s attention that certain breaches have occurred, and as a result some of the designs have been circulating on social media.

In order to avoid confusion and unnecessary speculation, the SARB has decided to release all the designs ahead of the official launch scheduled for 13 July 2018. The designs of these banknotes and coin are shown below.  More detailed information about the commemorative features of the notes and additional security features will be made available at the time of the official launch.

It is envisaged that these notes will be issued into circulation by 18 July 2018. These commemorative banknotes and R5 coin will co-circulate for a limited time, together with the current Mandela banknote series and the existing R5 coin, and both sets will remain legal tender.