Software-defined wide area networks (SD-WANs) have been generally known for a value proposition that revolves around cost savings on bandwidth. When businesses look to cut the high costs of running a wide area network, SD-WANs can help to save on money by replacing high-cost MPLS networks with lower cost broadband internet connections.

“However, there is more to SD-WAN than only cost-savings – this technology also offers speed, agility and ease of control,” says Anton Jacobsz, managing director at Networks Unlimited, the distributor for total SD-WAN solution provider, Silver Peak, for the Sub-Saharan African market. “We believe that SD-WANs will continue to come into their own during 2018, showcasing their real value proposition in a multi-factored manner. But let’s first look briefly at the cost-savings in a visual way.

“The following graph, provided by Silver Peak, outlines how the use of an SD-WAN, as compared to MPLS only, can cut WAN costs by up to 90 percent, and can also provide a significant cost saving when compared to a hybrid system.”

Jacobsz adds that an SD-WAN also brings agility to the network, for example by enabling network managers to shift to active-active architectures, make network changes centrally in alignment with application requirements, and facilitating network segmentation. He says, “According to Gartner’s Research vice president, Andrew Lerner, ‘SD-WAN is going Mainstream’[1], and Lerner notes that its tangible benefits, which are driving rapid adoption, also include cost, performance and availability.”

Lerner writes that ‘SD-WAN remains a topic of high interest among Gartner clients… In just three short years, adoption has taken off… We recommend you look at SD-WAN when refreshing WAN edge equipment, renegotiating a carrier contract, building out new branches, or aggressively moving apps to the cloud (among other reasons).’ 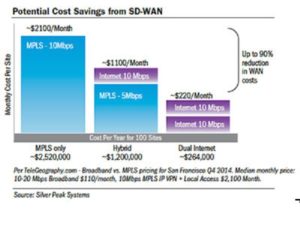 Jacobsz further refers to a recent blog written by Silver Peak founder and CEO, David Hughes, who also notes that the value of SD-WAN lies in more than just cost savings. Hughes notes the following predictions for the SD-WAN arena in 2018:

Today, most WAN traffic, to and from branch and remote sites, is destined for the cloud. However, the traditional WAN was architected for branch-to-data-centre traffic flows, not to efficiently support new cloud-driven traffic patterns. Hughes believes that in 2018, most enterprises will start to adopt a “cloud-first” SD-WAN architecture designed to efficiently and effectively support the ongoing evolution in their application mix.

The new WAN edge will replace the traditional branch router

With SD-WAN as a foundation, a new class of centrally-orchestrated, application-driven WAN edge devices will replace traditional routers in the branch.

Hughes writes: “For years, enterprises have been hamstrung, forced to choose between backhauling all branch office traffic to one of several next gen firewall-equipped hubs or deploying a firewall at every branch site. In 2018, the new WAN edge empowers enterprises to make this decision on an application-by-application basis. Network managers can elect to breakout trusted traffic locally at the branch, divert to a cloud-based firewall service (sometimes called a web services gateway), or backhaul to a full security stack at a central location. Enterprise-grade SD-WAN solutions also enable enterprises to micro-segment traffic across the WAN, thereby containing the impact of any breach.”

Cloud-based management becomes the default
Hughes notes that the number of devices under cloud management is growing steadily, expanding beyond Wi-Fi to switching, and now to the new WAN edge. He says, “Cloud-based management and orchestration simplify initial deployment, provide better ongoing availability, and most importantly, are backed with web-scale storage and compute resources that enable analytics and machine learning-based techniques that would be difficult to support in most private enterprise environments.”

One Virtual Network Function (VNF) is better than four

Hughes notes that ultimately, one advanced SD-WAN-based VNF will provide all the networking services required in a typical branch site deployment. The value of universal CPE will centre on the ability for enterprises to select their preferred technology stack without switching out hardware.

The first SD-WAN-driven listing on the stock market

In an exciting prediction, Hughes believes that as SD-WAN hits mainstream, the largest independent SD-WAN vendors will likely be in a position to pursue an initial public offering (IPO) and list on the stock market.

“We can see from the above statements that SD-WAN is gaining traction in the market. The idea of 2018 showcasing the first listing on a public stock exchange of an SD-WAN would be a symbolic development that would truly show how far this arena has evolved. Enterprises are well advised to carefully consider SD-WAN as an optimal solution for their organisation’s ongoing networking development,” concludes Jacobsz.

How Can Energy-Efficient Appliances Help You Save Money?