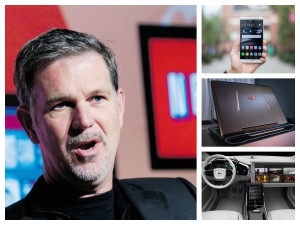 With the 2016 Consumer Electronics Show (CES) underway, the technology scene has been buzzing. Making the headlines this week was Huawei, the mobile device manufacturer unveiled its latest smartphone, the Huawei Mate 8, at CES 2016.

One of the biggest announcements to come out of CES 2016 was the made by Video On Demand (VOD) Service, Netflix. More than 130 countries, including South Africa and Nigeria officially have access to the service now. The team at IT News Africa wishes all our reader’s a very happy and successful 2016.

Nigeria: Gionee launches Gionee S Plus Smartphone
Chinese mobile phone manufacturer Gionee has introduced its latest device, the Gionee S Plus smartphone, in Nigeria. According to the company, the Gionee S Plus is aimed at simplifying communication for consumers who are continuously on the go. Read More.

Twitter reacts to #PennySparrow comments
Penny Sparrow, a real estate agent from KwaZulu-Natal in South Africa, took to social media platform Facebook and labelled African beachgoers as “monkeys.” According to the report this has resulted in a national social media outcry. Read More.

CES 2016: Media streaming for self-driving cars in development
At the 2016 Consumer Electronics Show (CES) Volvo revealed that it is developing intelligent, high bandwidth, streaming capabilities with its technology partner, Ericsson, that will ensure drivers and passengers get the most out of their time travelling in an autonomous Volvo. Read More.

Huawei Mate 8 to launch in these countries
Huawei’s latest mobile device, the Huawei Mate 8, will begin its initial launch wave in South Africa, Egypt, Europe, the Middle East, Southeast China, and a variety of other countries – which can be seen in the image below. Read More.

Netflix goes live in South Africa
More than 130 countries, including South Africa, officially have access to Video On Demand Service (VOD), Netflix. The announcement was made at the 2016 Consumer Electronics Show (CES) by Netflix chief executive, Reed Hastings. Read More.

Taking a closer look at Enterprise Mobility Management
Unified access networks is an emerging culture of enterprise communications and is the direct result of the proliferation of easily portable mobile devices. Read More.

More network decomposition expected in 2016
While the last 10 years has seen network functions consolidated into a single physical appliance, the move from the physical to the virtual world is now producing the opposite effect that will accelerate further in 2016, according to KEMP Technologies. Read More.

What does 2016 hold for the technology landscape?
It’s that time again – when we look back at the year that has passed and throw our predictions into the ring for what lies ahead. If anything was clear in 2015, it’s that advancements in technology showed no signs of slowing down. Apple Pay launched in the UK, smart watches took off and 3D printers were made affordable for the average consumer to use – to name just a few innovations. Read More.

2016 Predictions: What we’re hearing from organisations in SA
IDC and Gartner have predicted there will be a surge in demand for digitisation in all facets of enterprise businesses over the coming year. At Avanade, we are seeing these predictions becoming a reality for our clients, with digitisation an irresistible force that is driving companies to rethink their response to markets and reshape their operations. Read More.

Security is a critical part of the Internet of Things
Paolo Campoli is the ME&A Global SP leader and SP Sales CTO at Cisco. His responsibilities include direct Sales leadership for Global Service Providers accounts in the ME&A region, managing the entire Solution sales lifecycle and developing for the future. Watch the video interview here.