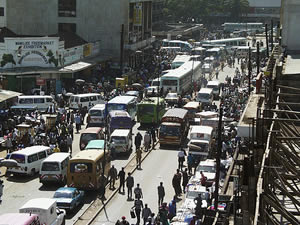 ACCESSKENYA Group has launched a free online traffic camera service on their home portal www.home.co.ke with the aim of easing traffic congestion and providing vital information to motorists.

The update service consists of Internet Protocal (IP) cameras that will capture traffic movement and transmit visuals of the same via the AccessKenya portal, live and in real time.

In a statement signed by the Group Managing Director, Jonathan Somen, the group has so far put up 27 such cameras within Nairobi’s Central Business District and its environs as well as two cameras in Mombasa.

“We have more than 20 cameras in key areas around the city including Ngong Road, Westlands, the Industrial Area and Mombasa Road,” said Somen adding that more cameras were to be installed in the coming weeks in the capital and in Mombasa.

“These cameras will help ease congestion in major traffic areas as well as help those who use these roads identify alternate routes that will definitely save them on time and fuel or halt their travel plans altogether till the traffic eases out.

“We believe that this will not only help people save time and become more productive but coupled with our market leading access@home broadband service, we are encouraging people to work longer from home, avoid the traffic congestion and ultimately deliver more productive working hours as opposed to sitting still in traffic.

“Many large corporates have already embraced the work from home model and we are encouraging that as the most beneficial solution for companies and employees,” said Somen.

The traffic camera visuals are easily accessible on the portal, giving one a clear view of the state of traffic along their preferred route at the click of a button. This can be done from one’s computer and it has also been developed for mobile phone access, ensuring accessibility of traffic updates even while on the move.

“There was a lot of interest generated by the traffic cameras when we showcased them at this year’s AccessKenya Africa Concours d’Elegance. The launch of these traffic cameras goes on to further affirm the AccessKenya Group as an innovator and as the data and IT expert in Kenya,” he said.