Samsung announced that pre-orders are now open in South Africa for its next generation foldable smartphones: Galaxy Z Flip4 and Galaxy Z Fold4.

The Galaxy Z Flip4 builds on the success of Samsung’s form factor, adding key features, including an upgraded camera experience, a larger battery and expanded customisation, while maintaining its compact design.

The Galaxy Z Flip4 is all about flexibility. Even down to its camera, where users can shoot hands-free video or capture full group selfies at various angles by partially folding Z Flip4 to activate FlexCam. Users can even take pictures from the Cover Screen through the main camera through the upgraded Quick Shot feature.

Thanks to Samsung’s partnership with Meta, the FlexCam feature is now optimised for popular social platforms, including Instagram, WhatsApp and Facebook.

Samsung seems to be focusing on the camera with the Z Flip 4. The devices carries an upgraded camera equipped with a 65 percent brighter sensor powered by a Snapdragon 8+ Gen 1 Mobile Platform.

Z Flip4 is crafted to go truly hands-free – doing more without ever opening the phone. Make calls, reply to texts, unlock the car and even control the SmartThings Scene widget, all from the Cover Screen.

The Galaxy Z Flip4 has an expanded 3,700mAh battery with Super-Fast Charging, now supported. The device can charge up to 50 percent in around 30 minutes. 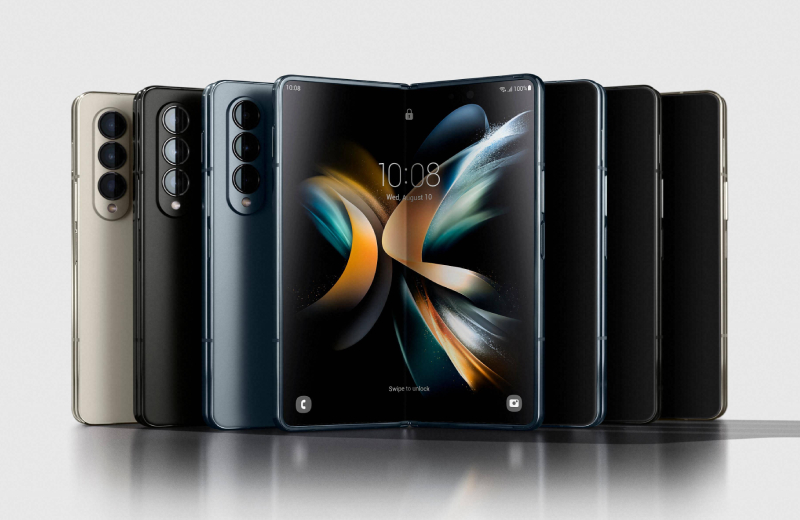 The Galaxy Z Fold4 is Samsung’s most powerful smartphone yet, according to the announcement.

Z Fold4 combines Samsung’s collective mobile technology expertise to create a device with increased functionality whether opened, closed, or in Flex mode and is Samsung’s first device to ship with Android 12L, a special version of Android created by Google for large-screen experiences, including foldables.

The Z Fold 4 also comes with a new Taskbar providing a layout similar to PCs. Multitasking is also more intuitive, thanks to new swipe gestures. Users can instantly switch full-screen apps to pop-up windows or split your screen in half for more ways to multitask.

Google apps, including Chrome and Gmail now support drag-and-drop, allowing users to quickly copy and paste links, photos and more from one app to another.

With Google Meet, users can now connect with more people while enjoying virtual co-activities, including co-watching videos on YouTube or playing games together on a video call.

A variety of camera modes, including the larger Zoom map activated on Capture View Mode, Dual Preview, and Rear Cam Selfie are custom-built to take advantage of the unique form factor for increased capturing flexibility.

And with the larger pixel size, a 23 percent brighter sensor, and enhanced processing power, users can capture clear images even at night.

For non-optimised apps, users can even control the device without disrupting the content with the new Flex Mode Touchpad, offering accuracy while pausing, rewinding, and playing videos, or zooming in and out of content while the device is in Flex mode.

The device runs on a Snapdragon 8+ Gen 1 Mobile Platform and is 5G enabled.

Galaxy Z Flip4 will be available in legacy colours: Bora Purple and Graphite and new colours: Pink Gold and Blue.

The Galaxy Z Fold4 and Standing Cover with Pen case are offered in more “refined” colours, including Grey Green, Beige and Phantom Black.

Both devices will also be accessible on 24 or 36 months’ contracts from network operators.

Customers who pre-order either Galaxy Z Flip4 or Galaxy Z Fold4 from 11 August to 31 August will get the newly launched Galaxy Watch5 for only R29 per month.

With the Samsung trade-in program customers who trade-in their old devices can receive R10,000 cashback or R400 off their contracts and 1-year free Samsung Care Plus screen protection valued at R1,999.