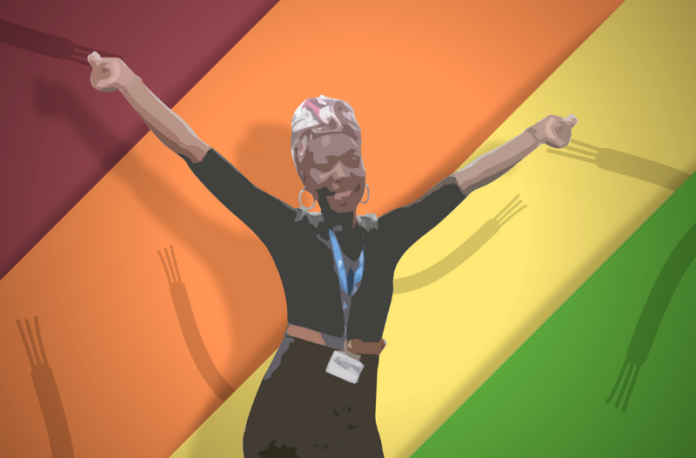 Growing up in Thabakgone GaMamabolo in Limpopo, I never conceived that I would find myself working as a fibre optic technician for one of South Africa’s largest ICT infrastructure companies. As a woman, I am one of very few.

Despite all that is being done to increase female representation in male-dominated fields, it’s still very rare to find women in my field. This is for a number of reasons, a major one being that many are not necessarily looking into my type of work as a possible career.

Although I have found it to be thoroughly rewarding, it requires me to be available at odd times and days of the week. It’s not a route that I likely would have taken had I had other opportunities that I could pursue but I am glad I did.

I always say that the career found me.

My parents passed on just before I was to go on to university, leaving me and my siblings with little prospects of furthering our education. Soon after high school, I went into the trade of making and selling African jewellery, which helped to bring in a small income. At that time, it did not seem like there was much else for me to look forward to without a tertiary qualification.

My big break – although it didn’t look like it then – came when a relative told me about a learnership that was being offered at the Sci-Bono Discovery Centre. It took a little bit of convincing, but I had nothing to lose; I grabbed the opportunity with both hands and launched into a career in fibre optics.

Eight months later I had completed the first phase of the training and was placed in the fibre division of an ICT infrastructure provider. Seeking growth and bigger opportunities I eventually applied for a job at Dark Fibre Africa. Being a female technician and competing with other more experienced male technicians, I was uncertain about the outcome of the interviews and assessments. When I was informed that I had been successful, I was ecstatic.

Having worked in the industry for some years now, and having overcome some of the perceptions of female technicians, I can say that there is definitely a place for women in this field. The growing relevance of the ICT sector was highlighted most vividly at the height of the COVID-19 pandemic. While others were on lockdown, for us technicians it was one of the busiest periods.

I have no doubt that the sector, in particular jobs such as ours, will continue to play an important role. I love my work and I have ambitions of becoming an Area Network Owner where I will have other fibre technicians reporting to me. I often think about how my life could have been completely different if that one person had not introduced me to it. The way I see it; I could have had the resources to pursue a degree and still joined the thousands of unemployed or even ended up in an unfulfilling job.

Although there has been a recent push to encourage more learners to consider artisanal jobs – which pay relatively well and have good career prospects – instead of narrowly focusing on the careers available through the diploma or degree process, information about some of these fields is still not always made readily available to women. Learners continue to see failure to access university education as a sentence to a lesser life than their seemingly more successful peers.

Before I was told about it, I didn’t even know what a fibre technician was. Even if I had heard about it, had it not been for this specific opportunity coming at the time that it did, the thought of working irregular hours in a male-dominated field would have had little appeal to me. I had also heard that the high network uptimes made it a very demanding role especially for a single mother like me.

I would like to call on women to look beyond what is considered to be typical careers for women and arm themselves with more knowledge about opportunities in the technology space. I call upon teachers, parents and society at large to change their perception of what they consider to be appropriate roles for women and encourage more girls to widen their prospects and take hold of the opportunities that less conventional careers may have to offer.