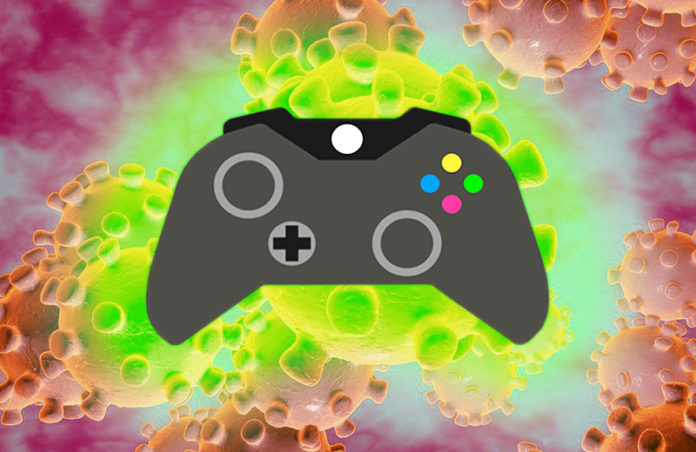 The #coronapocalypse is happening as we speak. That’s why, as citizens of the global community, we should all do our part to keep COVID-19 away from each other and ourselves. And that means staying indoors if we can help it and keeping away from any sort of large gatherings.

Now, if you simply have nothing to do, then this is probably the best possible time to pick up the world’s fastest-growing hobby – Gaming!

Now, if you simply have nothing to do, then this is probably the best possible time to pick up the world’s fastest-growing hobby – Gaming!

The following list includes 6 games, from multiple platforms that will help you stave off boredom while you’re doing your part to beat the Final Boss of viruses:

This 2011 release is considered one of the best games ever made. Bethesda’s classic open-world RPG boasts a living breathing virtual world to get lost in for hours upon hours. Live your fantasies of being an axe-wielding barbarian hero, an all-powerful wizard or a shadowy assassin in this title that is consistently updated and remastered by the developer.

A Special Edition was released in 2016 with modernised graphics and includes all DLC add-ons. The game also has a massive modding community, especially on PC where the player-created mods range in the hundreds of thousands adding endless more hours to the already limitless game.

Skyrim is available on almost everything. PC, PS3, and PS4 as well as Xbox 360 to Xbox One, and just recently on the Nintendo Switch. PEGI 18+.

The Special Edition currently retails for $36.91 on Steam.

Perspective gamers that don’t currently own or have access to the previously stated platforms can enjoy another Elder Scrolls experience right on their mobile phones. Available for free on iOS and Android.

The Elder Scrolls: Blades brings Bethesda’s patented first-person combat, character customization, and roleplaying elements directly to the small screen in a package wrapped in addictive gameplay and surprising graphical fidelity. Be anyone you want and uncover an overarching story in this mobile gaming feat.

Fans of platforming action games like Metroid and Super Mario would enjoy this modern take at the classic gameplay with surprisingly addictive combinations of exploration and character progression.

Play as a tiny warrior in a cavernous underground world that makes A Bug’s Life look like The Lord of the Rings. The charming art style, funny side characters, and genuinely fascinating story will keep you returning to this beautifully scored game.

Available on PC, Linux, MacOS, PS4, Xbox One, and Nintendo Switch. Currently retailing at $9.62 on Steam.

4. Castlevania: Symphony of the Night – Mobile

Check out the classic from which games like Hollow Knight emerged. The timeless gameplay of Castlevania’s most remembered title – now on mobile!

Released in time with Netflix’s own Castlevania Animated Series‘ latest season, Symphony of the Night sees you take control of the Son of Dracula as you journey through cursed Transylvanian forests and castles in order to defeat your father once and for all.

Available on iOS and Android and retailing for only $3.21.

You’ve probably heard of PUBG. The first game and originator of the battle royale mega craze that’s sweeping the nations of the earth, currently with Fortnite and Apex Legends.

Play alone or with a squad of your friends as you try to be the last one standing on a huge ruined island. A fun, quick and carelessly violent romp with your friends and people all over the world await you in this supremely popular and addictive shooter.

Available on PC, PS4 and Xbox One and retails for $19.30 on Steam. The game is also available free-to-play on Mobile on iOS and Android. The mobile version looks just as good and is just as fun.

No gaming list is complete without a game from FromSoftware’s Souls series. The series’ most accessible title is perfect for players who have stumbled on newly found time and want to try something distinct and unforgettable.

Create a character from scratch as you explore a post-apocalyptic medieval world in hopes to either save it or doom it forever.

Available on PS4, Xbox One, and PC and retailing on Steam for $48.35 – those with some extra pocket change should consider this life-changing epic to immerse themselves in and watch the world go by. PEGI 18+.