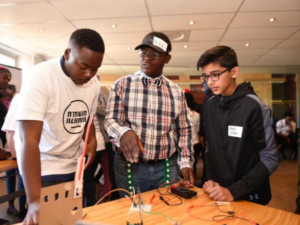 45 learners from townships across South African took part in a STEM Hackathon hosted by Accenture over the weekend. The Hackathon, which took place on 20 July 2019 at Rosebank, Johannesburg aims to stimulate learners’ interest in STEM careers and the experience will prepare them for the 4th Industrial Revolution economy.

“We wanted to honour the legacy of Nelson Mandela by hosting an event that is not only a fun and enjoyable day out for learners from disadvantaged communities, but also impart useful, practical skills in order to prepare them for the 4th Industrial Revolution and boost their employability,” said Khethiwe Nkuna, Head of Corporate Citizenship and Inclusion and Diversity Lead for Accenture in Africa.

Research shows that youth aged 15 to 24 years are the most vulnerable in the domestic labour market as the unemployment rate among this demographic cohort was 55.2 per cent, far above the national jobless rate of 27.6 per cent for the same period.

“South Africa needs to improve its competitiveness in math and science education and the starting point is to foster greater interest in technical education among our youth,” said Nkuna. “Our hope is that Accenture’s STEM Activity Hackathon will go some way towards instilling a love of math and science in young learners, who will one day go on to be the leaders of tomorrow.”

“It is often said that a large percentage of learners starting school today will one day fill jobs that do not yet exist. We believe that by imparting greater technical skills on learners and instilling the desire of learning math and science skills, we can better prepare our youth for an increasingly digital future.”

At the Accenture’s Hackathon, learners in the first three groups were tasked with building a telegraph out of everyday objects to reinforce their understanding of electrical energy and its role in communications. They then used a customized workbook to send and receive information in Morse code using their telegraph.

The remaining three groups built robotic models from cardboard and straws to understand the anatomy and biomechanics of the human hand. Learners conducted trials visualizing data in Excel to generate new ideas for improving the performance of their robotic models. Winning teams were selected and awarded medals during the prize-giving at the end of the day.