Inside the box, you can find a 90-watt charger, a padded sleeve for the device to slip into, and a cleaning cloth. There aren’t any additional accessories for the ZenBook 15.

The ZenBook 15 is the world’s most compact 15” laptop and is about the same size as a standard 14” ultrathin laptop. The standard colour scheme for this model is a beautiful Royal Blue spun-metal, giving it the look and feel of more higher-end devices. It’s also available in an Icicle Silver finish. Although beautiful, both this kind of finish and the Royal Blue on the casing do have a tendency to pick up fingerprints. Not the biggest design issue out there, but it could get annoying if you find yourself constantly wiping it down to maintain that luxurious look. 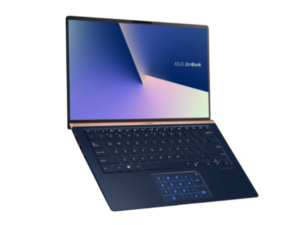 The NanoEdge display gives you so much more screen real estate. The super thin bezels, only 3 mm thick on the sides and 6 mm thick at the top, make for a sleek and minimal design and the webcam integrated into the top is both aesthetically pleasing and useful. Bezels this minimal on an LCD are pretty impressive, especially when you consider how much of the screen’s components are usually hidden underneath those bezels.

They also could have gone as far as removing the webcam altogether to max out the screen, but keeping the webcam was a smart move because a detail like that could make or break a sale when someone is comparing devices. The designers ultimately decided to keep the webcam because their research found that 76% of laptop users still use a webcam at least once a month. They also found that 80% of users prefer the webcam at the top of the screen.

An ultrathin camera module was used for the webcam and it has 3D IR capability for fast face-login, so it can take advantage of Microsoft’s biometric facial recognition feature known as Windows Hello. It also has a new four-element lens for sharper images which made for better quality video calls.

A pretty nifty design feature on the ZenBook 15 is what they’ve aptly dubbed the ErgoLift Hinge. What it essentially does is lift up the backend of the laptop as you open the screen. This tilts the keyboard at an angle for more comfortable typing and also creates a space below the device for better airflow and audio performance. It’s such a simple solution that tackles three common problems at once.

The chiclet-style keyboard is comfortable to type on and the keys are backlit for those late night typing sessions in the dark. There’s also a new function (Fn) key on ZenBook now acts as a toggle button, so instead of holding down the Fn key and pressing whatever F key is necessary, now you just press the Fn key once, then tap the respective F1 to F12. Sometimes onehanded typing has to happen and this key makes that so much easier.

The ASUS ZenBook 15 is a powerful but lightweight laptop. This makes it incredibly versatile because it can be used as a notebook but packs the processing power of a simple desktop setup. It’s sleek, it’s compact, and it’s everything you could want in an everyday device.