Developed by Insomniac Games and published by Sony Interactive Entertainment, Marvel’s Spider-Man swings onto console as a PlayStation 4 exclusive… And to give it early praise, it’s one of the best exclusives I have had the opportunity of playing during the course of 2018.

Marvel’s Spider-Man follows the story of an alternate Peter Parker who has not only been Spider-Man for over 8-years, but is also a scientist working hand-in-hand with Dr. Otto Octavius on advanced prosthetic limbs. While Spider-Man juggles both his day job and being a hero all at the same time, New York comes under threat from a variety of familiar villains that will stop at nothing to take down Spider-Man and reach their end goal.

With a number of villains to tangle with, Spider-Man must also face a new threat that comes in the form of Mr. Negative and the Demons. While they do sound like an alternative rock band, Mr. Negative and the Demons are in pursuit of a lethal bioweapon that has been dubbed the Devil’s Breath. With a number of villains to face off against as well as a horrific bioweapon, Spider-Man will need to summon everything he has in order to protect New York City from multiple threats while still maintaining his personal life at the same time. To keep things spoiler free, I’ll end the synopsis here. 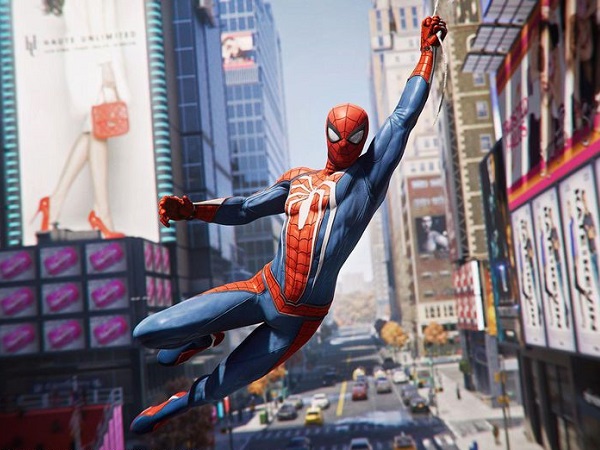 When it comes to storyline, Marvel’s Spider-Man features a pretty great one at that. Not only does it feature a ton of villains and plot twists, but it also dives deep into who Peter Parker is, what he does when he is not Spider-Man, and also focuses on his relationship with Mary Jane. This is something I really enjoyed experiencing. While it was great swinging around the city as Spider-Man, it was equally as entertaining playing as Peter Parker. This offered me a tremendous amount of insight into who Peter Parker is when he is not swinging through the streets of New York City as Spider-Man.

Speaking of swinging through the city, Marvel’s Sider-Man is a title that not only looks gorgeous – especially when played on the PlayStation 4 Pro – it is also a title that plays really well too. Swinging through New York is such a pleasurable and visually appealing experience thanks to its beautiful parks, tall buildings, and vibrant city. There are a number of awesome locations to visit too… these include Times Square, the Avenger’s Tower, the Empire State building, Wall Street, and even Brooklyn Bridge. To add to the fun, you can also take a selfie at each location and post it up on your social media feed thanks to PlayStation’s Share functionality.

Apart from taking some rather amazing selfies, you can also explore New York City in order to find a plethora of collectables. One of the best set of collectables in the game are Spider-Man’s backpacks. These contain various items from Spider-Man’s past such as a menu from his first real date with Mary Jane as well as the infamous dumpling recipe. There are plenty of backpacks out there to find, which also gives you more of an incentive to explore every inch of the beautifully crafted city of New York.

Apart from collectables and exploration, Spider-Man will also find himself taking on a load of villains in various scenarios as well as boss fights. When it comes to combat, it’s pretty smooth and fluent; however, it does have a bit of a difficult learning curve at first. I found myself struggling with large groups of enemies, but once I got into the swing of things I was taking down enemies quicker than I thought possible.

One thing I can say is combat is a lot of fun in Marvel’s Spider-Man; however, what makes it even more fun is the vast amount of gadgets and suits that you can unlock along the way. Thanks to the large variety of moves and gadgets, combat does not get stale nor does it get repetitive when facing various villains across the city. This can’t be said for boss fights, however. While they are spectacular… Boss fights do become a tad bit repetitive. While they also may seem hard at first, simple pattern recognition makes them a lot easier to handle. Having a boss move more randomly would have made things a lot more exciting.

Moving away from combat, Marvel’s Spider-Man looks absolutely incredible. New York is gorgeous and so are the character models. To compliment is this is the beautiful musical score, which makes Marvel’s Spider-Man feel like something that came straight out of an Avenger’s film.

Conclusion:
Marvel’s Spider-Man is excellent. Not only does it feature a strong storyline, but it also comes packed with a beautiful musical score and some rather eye-catching visuals. To add to the praise, it plays well and has enough content to keep you coming back on the daily.

If you were on the fence about Marvel’s Spider-Man now is the time to pick it up.