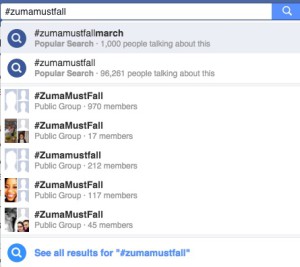 With the movement gaining traction, on social media, some of the larger events have drawn in the attention of over 11 000 individuals.

One of the more notable groups described their upcoming march as one that will be peaceful. The event description further stated that: “We need to take a leaf from Brazil’s book, and make this a march in support of the country as a whole and not a political march.”

The uprising of the hashtag came shortly after South African President, Jacob Zuma, had revealed that he had dismissed Finance Minister – Nhlanhla Nene. A position which Nene had only held for a period of 18 months. Zuma’s second late-night Cabinet shuffle in three months sent shock waves through the political system and among investors and the reaction was mostly negative.

According to Facebook stats, the Hashtag #Zumamustfall has well above 96 000 individuals discussing the topic. According to a report via timeslive.co.za, the Hashtag had originated at the hands of Democratic Alliance leader Mmusi Maimane. The report reveals that Maimane tweeted: “In conclusion: it’s time that we fire Jacob Zuma. #ZumaMustFall”.