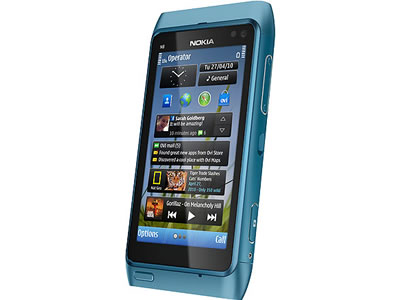 PHONE manufacturer, Nokia, has launched yet another smart phone in Kenya- The Nokia N8.

Available through Nokia distributors and retail outlets as well as Safaricom retail centres, the estimated retail price of the Nokia N8 is around Sh42, 000.

Speaking during the launch, Ken Oyolla, General Manager for Nokia East and Southern Africa said, “With the N8, and the new Symbian software, we are bringing a familiar, faster and more intuitive user experience to the world’s most popular Smartphone platform.

The Nokia N8 has received the highest amount of consumer pre-orders in Nokia history and we are thrilled to start sale of the N8 in Kenya, the first of Nokia’s new Symbian Smartphone range,”

“To appeal to today’s high-end buyers; Smartphone’s have to be enjoyable, useful and beautiful. Ease of use, excellent multimedia performance and elegant design are all essential elements of the package,” Oyolla added.

The Nokia N8 introduces a 12 mega pixel camera with Carl Zeiss optics, Xenon flash and a large sensor that rivals those found in compact digital cameras. Additionally, the Nokia N8 offers the ability to make HD-quality videos and edit them with an intuitive built-in editing suite.

Doubling as a portable entertainment centre, people can enjoy HD quality video with Dolby Digital Plus surround sound by plugging it into their home theatre system.

Social networking: People can update their status, share location and photos, and view live feeds from Face book and Twitter in a single app directly on the home screen. Calendar events from social networks can also be transferred to the device calendar.

Like other Nokia smartphones, the Nokia N8 comes with free Ovi Maps walk & drive navigation in more than 70 countries worldwide, with no hidden costs.

The latest beta release of Ovi Maps is also available for download from Nokia Beta Labs for the Nokia N8. It features visibility to public transport in 85 cities around the world, as well as real-time traffic, safety camera alerts, visibility to parking and petrol stations, and speed limit warnings.

Powering the Nokia N8 is Symbian ^3, the latest edition of the world’s most used Smartphone software, which introduces several major advances, including support for gestures such as multi touch, flick scrolling and pinch-zoom. The Nokia N8 also offers multiple, personalizable home screens which can be loaded with apps and widgets.

The new 2D and 3D graphics architecture in the platform takes full advantage of the Nokia N8’s hardware acceleration to deliver a faster and more responsive user interface.

The Nokia N8 is Nokia’s first device to be integrated with Qt, a software development environment that simplifies the development and makes it possible to build applications once and deploy across Symbian and other software platforms.