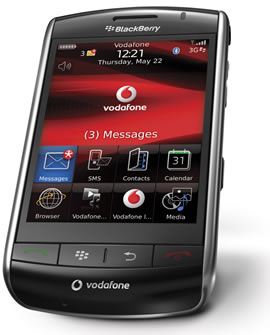 Designed to satisfy the needs of both consumers and business customers, the BlackBerry Storm smartphone combines the powerful communications features, global connectivity and personal productivity advantages of the BlackBerry platform with a revolutionary touch-screen technology that dramatically enhances the touch interface and enables easy and precise typing.The world’s first “clickable” touch-screen responds much like a physical keyboard and also supports single-touch, multi-touch and gestures for intuitive and efficient application navigation.

In the U.S., Verizon Wireless customers will benefit from the nation’s most reliable wireless voice network and the pervasiveness of Verizon Wireless’ reliable high-speed 3G Evolution-Data Optimized (EV-DO) Revision A (Rev. A) network for rich Internet browsing and multimedia applications. In Europe, India, Australia and New Zealand, Vodafone will support customers with its high-speed 3G mobile broadband networks and the power and reach of the world’s leading international mobile communications group.

“We are proud to introduce the first touch-screen based BlackBerry smartphone together with Verizon Wireless and Vodafone,” said Mike Lazaridis, president and co-chief executive officer at RIM. “The BlackBerry Storm is a revolutionary touch-screen smartphone that meets both the communications and multimedia needs of customers and solves the longstanding problem associated with typing on traditional touch-screens. Consumers and business customers alike will appreciate this unique combination of a large and vibrant screen with a truly tactile touch interface.”

“The BlackBerry Storm offers our customers more ways to stay connected to both their personal and professional lives – whether in their communities or around the globe,” said Mike Lanman, vice president and chief marketing officer of Verizon Wireless. “The BlackBerry Storm combines the reliability of our 3G network with the dependability and network efficiency of the BlackBerry platform to deliver our customers the ultimate wireless experience – all in one of the coolest smartphones available on the market today.”

“We are delighted to bring the power of the purpose built BlackBerry Storm, directly into the hands of consumer and business customers,” said Frank H. Rovekamp, global chief marketing officer, Vodafone Group.

“With its unique clickable touch-screen, giving access to all the desirable multimedia features and services such as browsing, music and video, turn-by-turn satellite navigation, messaging and social networking, and BlackBerry’s mobile heritage and strong business reputation, the BlackBerry Storm is being brought by Vodafone into the consumer world. With Vodafone’s ultra high-speed, reliable mobile network and this exclusive and exciting new smartphone, there has never been a better time to be with Vodafone.”

The BlackBerry Storm smartphone comes with an innovative touch-screen that actually depresses ever so slightly when the screen is pressed.

The user distinctly feels the screen being pressed and released with a gentle “click,” similar to the feeling of a key on a physical keyboard or a button on a mouse. The “clickable” touch-screen gives the user positive confirmation that they have made a selection and the result is a dramatically enhanced touch interface and a highly-intuitive typing experience.

In addition to the familiar navigation keys (“phone,” “menu” and “escape”) that are common to other BlackBerry smartphones, the new BlackBerry Storm adds support for multi-touches, taps, slides and other touch-screen gestures, so customers can easily highlight, scroll, pan and zoom for smooth navigation.

Other relevant features, such as cut and paste, are only a touch away for the ultimate smartphone experience.

Customers will enjoy a full HTML high-performance browser that works in either portrait or landscape orientation. Navigating Web sites is fast and easy with the touch-screen interface that lets users double tap to zoom in and slide their fingers to scroll and pan.

Icons along the bottom of the display allow for quickly accessing Web sites, switching between “Page View” and “Column View” as well as the ability to toggle between “Pan” mode and “Cursor” mode. The enhanced browser supports file downloading, streaming audio and video (RTSP), and with its built-in RSS support, new content from supported Web sites can be automatically pushed to the user.

The BlackBerry Storm smartphone brings the full power of the industry’s leading mobile e-mail and messaging solution without compromise. It supports personal and corporate e-mail and text (SMS), picture (MMS) and instant (IM) messaging on the most prevalent consumer and enterprise platforms, as well as easy access to popular social networking sites.