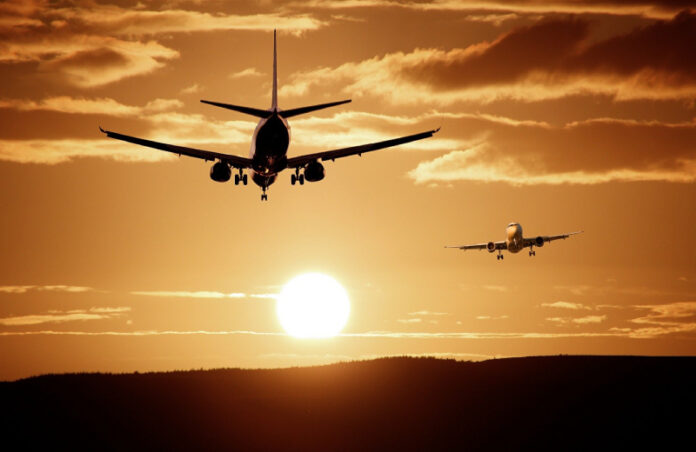 While onboard Wi-Fi has become more frequent across an increasing number of destinations, in-flight connectivity (IFC) solutions are still relatively new in the aviation industry.

Over the last decade, commercial airlines have faced an increasing number of challenges: a growing competition from low-cost companies, increasing fuel prices and stagnating customer satisfaction rates – around 55% according to IATA’s pre-COVID Global Passenger Surveys.

In the meantime, IFC has been increasingly seen as a way to boost customer engagement and monetization onboard. For satellite operators this segment has also become more strategic, as a way to diversify their revenue streams.

While the pandemic temporarily brought to a halt the dynamic of this nascent market, new deals between satellite operators, airlines and IFC providers were signed this year, following the resumption of commercial flights.

The first offers emerged at the beginning of the 2010s, in the wake of the first partnerships between satellite operators – mainly Inmarsat at that time – and the early IFC Resellers. Due to low data transfer rates allowed by old Ku-band frequencies at the time, the potential of these offers was very limited.

Hence, customers had to wait several more years for the market to open, with the multiplication of IFC solutions available, the increased number of aircraft equipped, and the modernization of the satellite capabilities.

Ten years later, the market significantly expanded, but mainly in the hands of a few numbers of players. On the IFC solutions side, 3 actors accounted for more than half of the global IFC revenues prior to COVID. If the market slightly opened the last two years, with the revenues being distributed between a bigger number of companies, it is mainly due to the ongoing impact of the pandemic across the more mature markets: North America and Europe. 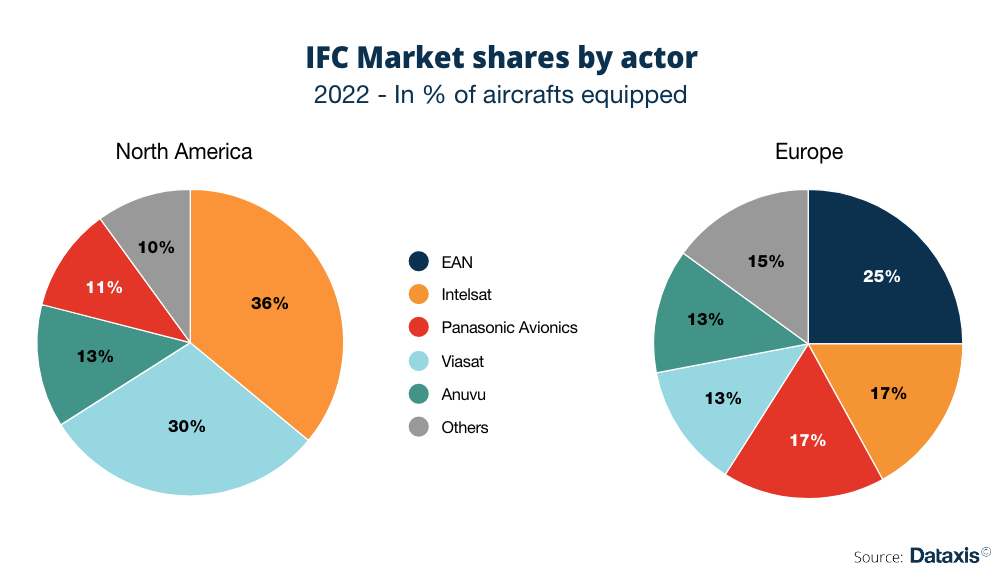 The global IFC market can be segmented into three main distinct groups of countries. North America has witnessed the fastest adoption, with more than two-thirds of the commercial aircrafts in activity equipped with IFC solutions. Aircraft fleets from Latin America, Europe, the Middle East, and Asia-Pacific all have penetration rates between 20% and 35%. Finally, Sub-Saharan Africa is currently the least addressed market, with less than 10% of the commercial aircrafts equipped.

These disparities can be explained by the high initial investment required to equip an aircraft and the limited direct value so far due to the pandemic and its aftermath. IFC solutions are part of additional services provided by airlines, to be more competitive and to increase their rebooking rates. In its annual Inflight Connectivity Surveys over the last years, Inmarsat has emphasized that most passengers consider inflight Wi-Fi to be a must-have instead of a luxury. Since its previous survey, Inmarsat noted “a 40% increase in those passengers who believe Wi-Fi is important to a positive flying experience”. And to add: “a massive 82% of respondents said they would rebook with an airline if they had a positive Wi-Fi experience while onboard.” 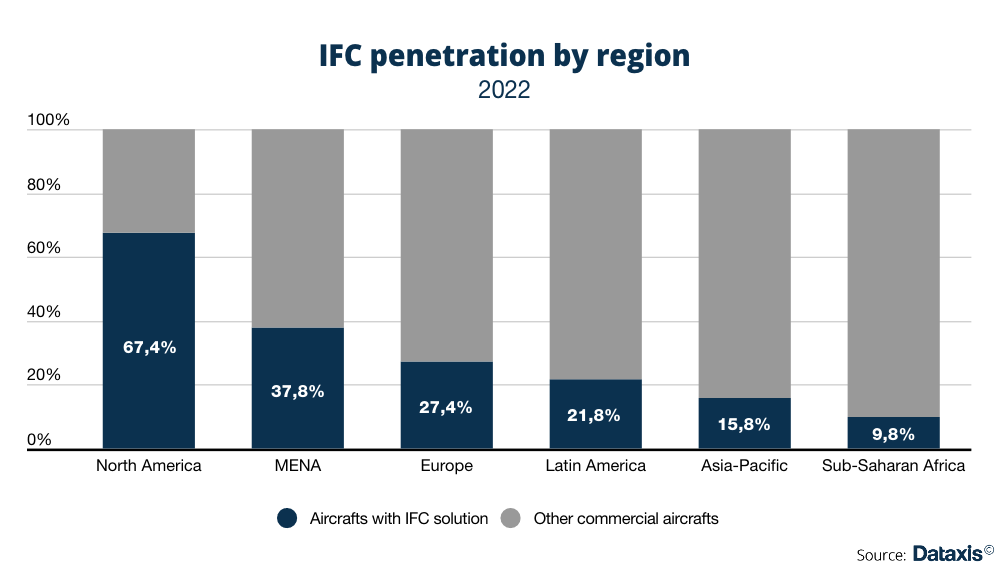 With the acceleration of adoption and the growing demand from the customers, business models have remained quite rigid: most of the IFC offers lack flexibility when it comes to offer broadband services, with very few plans that can adapt to the customers’ needs. Hence, airlines could instead diversify their offers, providing specific packages fitting different purposes: high-speed internet for gaming, unlimited data consumption for social media, in-flight or at the airport premium services for instance.

In terms of technology, satellite access has proven to be more reliable and flexible than air-to-ground connections, limited in terms of coverage, and budget-intensive in terms of infrastructure. Hence, IFC has become an additional asset for the broadband strategy of satellite operators. Over the last 5 years, partnerships between satellite operators and IFC providers have been multiplying across all regions, led mainly by Inmarsat, SES, and Intelsat. Some operators have started to play in both teams, delivering at the same time the satellite capacity and the IFC solutions to the customer, providing strong business synergies.

Two main markets are now being scrutinized with significant growth potential. Eutelsat and SES have signed partnerships with IFC resellers across the MENA region, following the launch of their new satellites, Eutelsat 10B and SES-26, with commercial deals expected to start next year.

China is also expected to become a significant market. While the domestic market remains mainly captive as of today, in the hands of Apstar and the China Academy of Space Technology, the Civil Aviation Administration of China started to facilitate network connectivity in the Chinese civil aviation fleet, with more than a thousand aircrafts now capable of providing in-flight services across satellite and air-to-ground.

While uncertainties remain regarding the recovery of the market, 2023 should be a decisive year for the industry, with a better segmentation of business models – the experiences led during the current World Cup will help figure out the most efficient mix – and the entrance of a potential disruptor with StarLink.