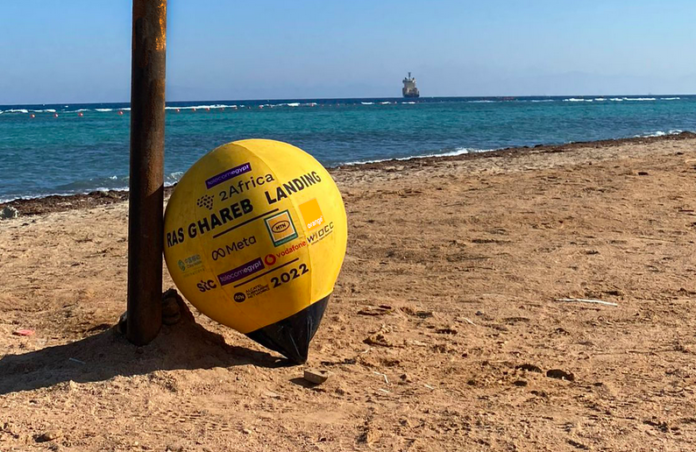 As part of the 2Africa consortium, Meta and Telecom Egypt announce the first landing of the 2Africa subsea cable in Egypt at Ras Ghareb in the Red Sea, with another landing expected in Port Said in the Mediterranean Sea at a later date. The Ras Ghareb landing is one of several taking place in the coming months as the cable will be extended to a total of 46 locations across Africa, Europe, and Asia by the completion of the project in 2024.

Building on previous investments, Meta and Telecom Egypt’s contribution to 2Africa enables more people who rely on the internet to have an improved experience while promoting a more affordable internet for all.

Announced in May 2020, the 2Africa subsea cable system together with its Pearls extension, are designed to deliver seamless international connectivity to approximately three billion people, representing 36% of the global population and connecting three continents: Africa, Europe, and Asia.

At 45,000km, it will be the longest subsea cable ever deployed, serving communities that rely on the internet for services from education to healthcare and business, with all experiencing the economic and social benefits that come from this increased connectivity.  Subsea cables lay the foundation for the global internet, connecting people and continents, and will likely play a big part in the Middle East and Africa’s ongoing development.

Subsea cables often translate into economic growth for the surrounding population, benefiting individuals and businesses. For example, RTI estimates that 2Africa will generate a USD 26.2 to 36.4 billion impact (at purchasing power parities) on Africa’s GDP within 2 to 3 years of becoming operational.

“We are very content with Telecom Egypt’s continuous achievements in extending its international infrastructure. We recently celebrated the landing of our Red2Med cable system in Ras Ghareb, and today we are excited to announce the first landing of 2Africa in the same location. The second landing in Egypt will be in Port Said in a few months. Our contribution to 2Africa–as a provider of hybrid crossing solutions (using the subsea route in the Red Sea via Red2Med in addition to two brand new crossing terrestrial routes) and as a consortium member–is another testimony of our commitment to provide unmatched solutions and reach to our customers locally and internationally. We are continuously investing in new infrastructure and developing dynamically to increase our network resilience and broad reach to maintain our leading edge in the region by offering our partners the best services and solutions.”

“Connecting people is the very core of Meta’s priorities, and access to faster internet is no longer a luxury but an absolute necessity, as crystalized by the COVID-19 crisis. The internet was integral to keeping our daily lives running in some semblance of routine. In times of trouble, it is a tool for survival, while during better times, it is essential to help economies across the world thrive and raise the standards of living for large segments of society. Investing in submarine cables brings more people online to a faster internet, and 2Africa is a perfect example of our innovative partnership model where everyone benefits through the development of technology infrastructure to lead the industry in routes, capacity, and flexibility.”

The Ras Ghareb landing will connect to the upcoming Port Said landing  via two terrestrial trans-Egypt routes adjacent to the Suez Canal. The crossing solution, deployed with next generation fiber, will offer seamless optical paths between Africa, Asia, and Europe. It is also complemented with the subsea festoon in the Red Sea on Telecom Egypt’s novel Red2Med cable system connecting Ras Ghareb, Zaafarana, and Suez.