MTN has lined up a series of value-for-money data deals for new and existing customers for Black Friday.

This summer, MTN is already offering data deals with “Go Big Go Bozza” to ensure customers can party, play, rest or revive with data for days. To further enhance this summer of data abundance, MTN is offering a huge host of Black Friday data deals.

“The past 17 months have not been easy for South Africans but, with our amazing summer offerings and now our Black Friday deals, we aim to keep making summer a whole lot brighter. From doubling data to incredibly low data prices, we hope customers, new and existing, use their extra data to stay connected to family and friends as we enter the festive season,” Jacqui O’Sullivan, Executive for Corporate Affairs at MTN South Africa.

On the MyMTN Choice 40GB plan, customers will get 20GB Anytime data, 20GB Night Express data. For the summer period, MTN will add 40GB data, plus an additional 40GB Black Friday special data, amounting to a total of 120GB for only R199 per month for 24 months. 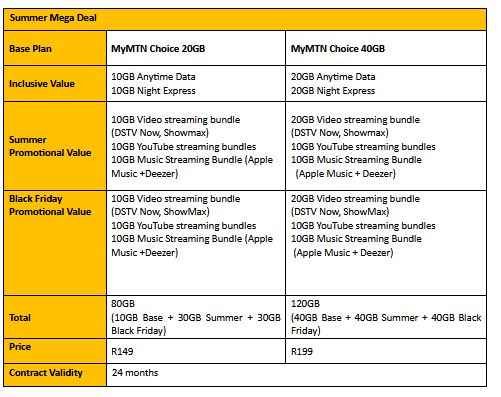 Customers can also get a 2GB data for only R30, valid for seven days. This deal includes 500MB Anytime data and 500MB Night Express, plus 1GB Black Friday promotional data (500MB Anytime + 500MB Night Express). To sweeten the deal, customers also stand a chance to win one of two Lenovo laptops for buying any of these two deals.

On MTN Mobile Money (MoMo) customer can purchase 1GB data for R1 and the 1GB Social Pass Bundle for R15.