Global businesses continue to house ‘dark data’ within their organisations, creating a honeypot for cybercriminals, finds research from Veritas Technologies, a worldwide leader in enterprise data protection and software-defined storage.

The Value of Data study, conducted by Vanson Bourne for Veritas, surveyed 1,500 IT decision makers and data managers across 15 countries. It reveals that on average, over half (52 per cent) of all data within organizations remains unclassified or untagged, indicating that businesses have limited or no visibility over vast volumes of potentially business-critical data, creating a ripe target for hackers. 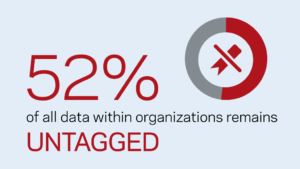 Classifying data enables organisations to quickly scan and tag data to ensure that sensitive or risky information is properly managed and protected, regardless of where that data lives. This broad visibility into data helps companies comply with ever-increasing and stringent data protection regulations that require discrete retention policies be implemented and enforced across an organisation’s entire data estate.

“As workforces become more mobile and the barriers between work and personal life break down, company data has become dispersed across numerous environments,” said David McMurdo, Regional Director, South Africa. “When data is fragmented across an organisation and has not been properly tagged, it is more likely to go ‘dark’, threatening the company’s reputation and market share if it falls foul of data protection regulations such as GDPR. So, it’s vital that organisations take full responsibility for ensuring their data is effectively managed and protected.”

The dark age of data

Organisations consider strengthening data security (64 per cent), improving data visibility and control (39 per cent) and guaranteeing regulatory compliance (32 per cent) among their top key drivers for day-to-day data management. Yet the majority of respondents admit that their organisation still needs to make improvements in all of these areas.

“A company’s dark data reservoir may be out of sight and out of mind for many organizations, but it’s an enticing target for cybercriminals and ransomware attacks. The more organizations know about the data they hold, the better they will be at judging its value or risk,” added McMurdo. “But with the average company holding billions of data files, manually classifying and tagging data is beyond human capability. Businesses must implement data management tools with algorithms, machine learning, policies and processes that can help manage, protect and gain valuable insights from their data, regardless of where it sits in their organisation.”

How To Create A Relaxing Garden Environment

5 Things to Remember When Visiting Kenya During COVID-19