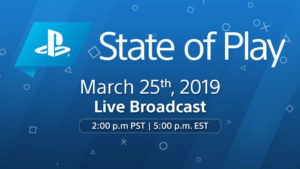 The first episode, kicking off on Monday, March 25 at 14:00 Pacific Time (23:00 CAT), will share new updates and announcements for PS4 and PS VR software. It will feature things like new trailers, new game announcements and new gameplay footage.

This will be an alternative way for Sony to showcase its upcoming projects since the company announced that it would not be at E3 this year. This follows the suit of other major game developers like Nintendo, who opted out of big press conferences with their Nintendo Direct presentations. It also won’t be a one-time thing. More State of Play streams will be announced later in 2019 and perhaps further on.

Games we expect to see in this State of Play include PS4 exclusives like Ghost of Tsushima, The Last of Us Part II, Concrete Genie, Dreams, and Death Stranding.