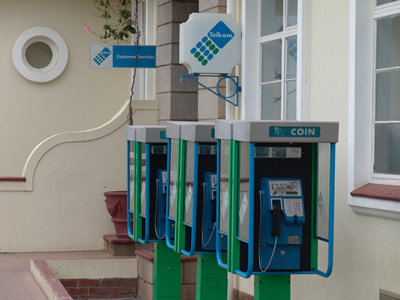 In addition to the primary solution that caters for the IEC’s needs, Telkom is also fulfilling the requests of broadcasters and media channels so that South Africa and the world are kept informed at every step of the voting and counting process.

Telkom’s role prior, during and after the 2011 Municipal Elections on 18th May 2011 is to provide telecommunications infrastructure to all of the IEC controlled election-related points of presence throughout South Africa.

Telkom will in effect enable the safe and secure delivery of ballot results from 20 864 polling stations around the country to the National Results Centre (NRC) at the Tshwane Show Grounds, via 350 Municipal Election Offices (MEOs), 9 Provincial Results Centres (PRCs) and the IEC’s Headquarters (IEC HQ).

Godfrey Ntoele, Telkom’s Managing Executive for Large and Government Business Services, says:  “We are privileged to once again serve the nation and to be part of the ongoing development and evolution of the democratic process in South Africa. Free and fair elections are an essential component of our democracy.”

“The partnership between Telkom and the Electoral Commission has been a long and successful one. We have been part of the democratic process starting with the historic elections in 1994, and all the national, provincial and municipal elections which have followed.

“The elections do not happen only on election day. We have partnered the Electoral Commission in the registration process and the compilation of the voters roll, which started some time ago, and we continue providing communication services until long after election day is over.

“On the two registration weekends in February and March, in preparation for the 2011 Local Government Municipal elections, we provided the infrastructure to register over 23, 6 million voters successfully. Telkom is committed to providing the most secure and stable telecommunications solution for the entire election process from start to finish, ensuring that every vote is counted,” says Ntoele.

“To this end Telkom’s extensive national footprint, ubiquitous network and the depth of skills and expertise within the organisation has facilitated the customer specific requirements of the IEC,” he continued.

Cybernest, Telkom’s Data Centre Operation is at the heart of the IEC’s Disaster Recovery (DR) measure. Working as a mirror image of the IEC’s Head Office, all data activities at the IEC HQ are replicated at Telkom’s Data Centre in real time. In the unlikely event of disaster at IEC HQ, the DR site will take over all activities and the elections will proceed uninterrupted.

Telkom has also provided the infrastructure for the IEC Call Centre in Centurion which was used during the voter registration process. This Call Centre will remain operational over the entire election period.

FinTech in Africa: Driving Much More Than Financial Inclusion