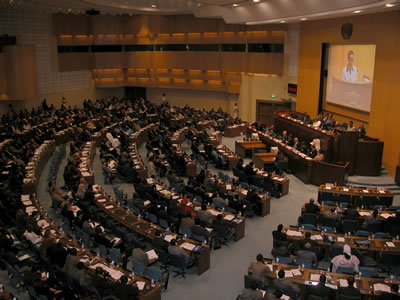 The 2010 edition of the World e-Parliament Conference has officially opened at the Pan-African Parliament (PAP) with delegates from eighty (80) parliaments and five continents attending. The conference is aimed at sensitizing parliaments across five continents on the need to use modern technology to help improve communication with their constituents, particularly at the grassroots.

Thomas Stelzer, Assistant Secretary-General for Policy Coordination and Inter-agency Affairs of the United Nations stressed the need for national parliaments to use information and communication technology (ICT) as a tool to reach out to the less privileged people for the betterment of their countries. He indicated that the use of technology has helped tremendously in the improvement of some major sectors of the economy, hence the need for parliaments to make judicious use of it.

Hon. Ntlhoi Motsamai, Speaker of the National Assembly of Lesotho, who represented the President of the Inter-Parliamentary Union (IPU), on her part noted that the IPU is providing the link for advanced parliaments to work with the less advanced ones. She urged the Global Centre for ICT in Parliaments and the Office for the Promotion of Parliamentary Democracy to do more to bring a better corporation between parliaments and donors, so that the citizenry can be the beneficiary.

The Chairperson of the National Council of Provinces of South Africa, Hon. Mninwa Mahlangu, indicated that parliaments, as part of their law making functions, must ensure that they work for the interest of the people they represent. That, according to him, can be best done through the efficient utilization of ICT services. He lamented that in Africa a lot of people are not using ICT because of various infrastructural difficulties that need to be addressed.

The President of the Pan-African Parliament, Hon. Dr. Moussa Idriss Ndélé, welcomed all delegates to the conference and wished them fruitful deliberations. He added that technological advances have led to changes in the political, economic and cultural sphere in both the advanced and the developing worlds. Hon. Ndélé however noted that there were still problems facing African parliaments, such as low technological literacy. He called on the United Nations to help in resolving these problems in order for these parliaments to play a bigger role in the promotion of democracy.

In their keynote addresses, Deputy Minister of Public Service and Administration of the Republic of South Africa, Hon. Radhakrishna Padayachie, and Senior Advisor of the Global Centre for ICT in Parliaments, Jeffrey Griffith, talked about the importance of parliaments moving with time as far as technology is concerned. Padayachie said ICT is a vital instrument that can move government to respond faster to the needs of its people. He added that the e-parliament conference presents unique opportunities to the nations to learn and exchange ideas and views on ICT.

On his part, Griffith said most parliamentarians around the world are not familiar with technology and that citizens are not familiar with the legislative process. He said websites have become the primary means of communication for parliamentarians, though they do not yet meet some of the most important status. He said although the world is moving faster towards technology, most parliaments still are not making good use of technology.

The first working session was then held under the theme ?Mind the Gap: the Impact of the Digital Divide on Parliament and Democracy?.