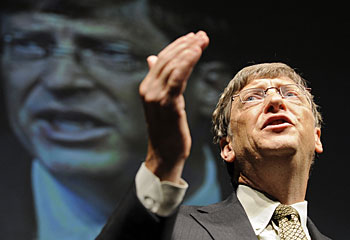 Bill and Melinda Gates announced yesterday that they were joining Michael Bloomberg, the mayor of New York, in a $500m campaign against smoking in the developing world.

As smoking has become less acceptable and profitable in the rich world, tobacco companies have expanded in countries where there are few restrictions and little in the way of public health warnings. Each year 5 million people around the world die of smoking; by 2030, more than 80% of them will live in low- and middle-income countries. According to the Gates Foundation, the poorest households in Bangladesh spend almost 10 times as much on tobacco as they do on education.

The initiative, which will include campaigns to persuade people of the inadvisability of smoking, and efforts to induce governments to impose bans – is a departure for Gates. His foundation has been primarily committed to finding solutions to health problems, such as vaccines for killer diseases.

But he is joining forces with Bloomberg, who made New York smoke-free in 2002 and gone on to found an anti-tobacco initiative working to get worldwide bans. “Tobacco-caused diseases have emerged as one of the greatest health challenges facing developing countries,” said Gates. “The good news is, we know what it takes to save millions of lives; and where efforts exist, they are working.”

Gates will put in $125m over five years. Bloomberg yesterday announced his own new commitment of $250m, bringing his total over four years to $375m.

Bloomberg’s initiative supports projects that increase tobacco tax, change the image of tobacco, protect non-smokers from exposure to smoke, and help people quit. Together with the World Health Organisation, he launched the Mpower package of evidence-based interventions this year: monitor tobacco use and the policies to prevent it; protect people from tobacco smoke; offer smokers help to quit; warn of the dangers of tobacco; enforce bans on advertising, promotion and sponsorship; and raise taxes on tobacco.

The Gates money will be used specifically to extend campaigning into China and India, and to try to stop the tobacco epidemic taking off in Africa.

In Beijing smoking in public places has been banned before the Olympics, but China has 350 million smokers, a third of the world’s total, and a million Chinese a year die from tobacco. India has 700,000 deaths a year, expected to rise to 930,000 by 2010. At present, 77% of the market is in bidis – small, hand-rolled cigarettes that are five to six times more likely to cause lung cancer than ordinary cigarettes.

More than 120 countries have ratified a WHO convention aimed at restricting marketing of cigarettes, but there is wide concern at the tobacco multinationals’ efforts at promotion even in some signatory countries. Cigarettes are promoted as a glamorous accessory in ads and in films, and firms are accused of targeting young people in a way they could not in the UK.

Bloomberg and Gates point out that there are success stories all around the world, however. Uruguay, the UK, France, New Zealand, Italy and Ireland are all smoke-free – but so are Mexico City and Abuja in Nigeria. Egypt has recently raised its tobacco tax, Brazil has graphic pictorial warnings on packets and the Philippines bans all forms of tobacco advertising.