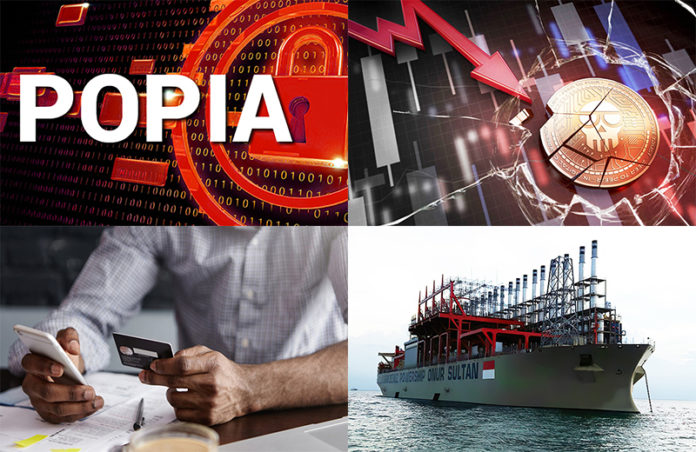 “Unicorn” FinTech startups have allowed mobile payments to explode in Africa, and South African investors lose enormous amounts of money in a cleverly orchestrated heist, believed to be the largest crypto scam in the continent’s history.

Rounding out this week’s stories: The PoPIA compliance deadline has been extended after a series of glitches and faults crashes functionalities in the PoPIA registration website.

This is after the company won a tender to produce 2000 megawatt (MW) to aid SA’s crippled energy provider Eskom.

Approvals were blocked by the country’s Department of Forestry, Fisheries and the Environment for reasons including that it did not comply with public participation rules.

Karpowership is however aiming to appeal the decision and claims to be confident in their success.

“Karpowership SA conducted a robust public participation process, met all South Africa’s stringent environmental requirements and is confident that it will win the appeal,” a spokesperson said in a statement.

Five African fintech startups, namely: Flutterwave, ChipperCash, Interswitch, Paga and OPay are now being identified as “unicorns” by investors, the business media and analysts following the surge of mobile payments in Africa during the worldwide pandemic.

Convenience, security and trust are fuelling the seismic wave of mobile transactions together with the pervasive penetration of affordable mobile feature phones on the continent.

Another key driver in the surge of mobile payments is the increasing affordability of mobile phones in Africa.

More interesting insights within the article.

AfriCrypt, a South African cryptocurrency investment company, has reportedly defrauded around $3.6-billion in investor funds after the company made claims that its trading systems had been hacked.

Investors in AfriCrypt reportedly count amongst South African celebrities and other high profile individuals. In a matter of hours the staggering monetary amount, around R54-billion, seemingly disappeared without a trace on 13 April.

The story features odd twists and turns, including the fact that the two operators and creators of AfriCrypt were 17 and 20 years old. It is believed that they fled to the UK with the money after the heist and obfuscated their trail through the usage of Crypto Mixers on the dark web.

After a series of technical glitches with the Information Regulator’s registration portal for information officers looking to achieve compliance with the PoPI Act, the 1 July 2021 compliance deadline has been scrapped.

A new deadline of 1 February 2022 has been announced to allow more organisations enough time to become PoPIA complaint.

The Information Regulator of South Africa says that it saw increased engagement from responsible parties as the prior deadline was coming closer.

Announcements will come when the registration portal is fixed and new accessibility features are added.