In case you missed it, social networking service, Facebook recently published a blog post entitled ‘Imagining a new interface: Hands-free communication without saying a word’ — and it covers exactly what the name suggests, their research and proposed a solution to devices that can essentially READ YOUR MIND.

Back in 2017, the company launched a programme focussing on developing a brain-to-computer interface that (in their words) ‘lets people type by simply imagining themselves talking’.

Snapback to 2019 and Andrew ‘Boz’ Bosworth, AR/VR Vice President at Facebook has clued us in on Facebook’s progress:

“Today we’re sharing an update on our work to build a non-invasive wearable device that lets people type just by imagining what they want to say. Our progress shows real potential in how future inputs and interactions with AR glasses could one day look.” 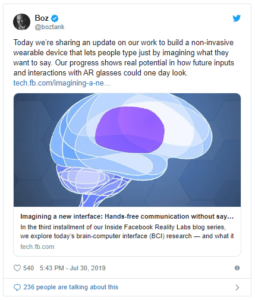 You’re wondering, what’s the key take away from his tweet? Facebook’s progress shows ‘real potential’ in how devices of the ‘future’ could look — so not devices of the present… meaning we still have some time before they’re able to read our minds.

“It could take a decade,” says Facebook in the blog post, “but we think we can close the gap”.

One of the ways the social media giant is exploring its mind-reading potential is through the use of a pulse oximeter — essentially a monitoring system that detects brain activity through the consumption of oxygen by neurons’.

“We don’t expect this system to solve the problem of input for AR anytime soon. It’s currently bulky, slow, and unreliable”.

“But the potential is significant, so we believe it’s worthwhile to keep improving this state-of-the-art technology over time. And while measuring oxygenation may never allow us to decode imagined sentences, being able to recognise even a handful of imagined commands, like ‘home’, ‘select’ and ‘delete’ would provide entirely new ways of interacting with today’s VR systems — and tomorrow’s AR glasses.”

So while we can’t be too certain if Facebook plans on using this technology to better their consumer experience or read the minds, we can rest in the knowledge that we have approximately 10 years to decide.