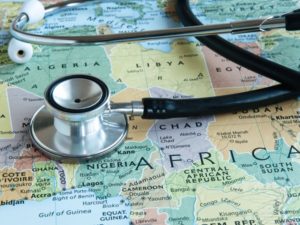 The preliminary report finds that neither government nor existing public-private partnerships are effective enough, and that existing PPPs disproportionately focus on a small number of countries.

The preliminary report recommends a new model, one in which PPPs prioritize around the most significant disease burden and broaden their scope to benefit the health of the whole continent, which is deemed critical to driving long-term economic growth in Africa.

“The dialogue was a much-needed call-to-action for the African private sector as evidenced by the research,” said Aliko Dangote, President, Dangote Group & Chairman, Aliko Dangote Foundation. “The best way to move Africa forward is for businesses to step up in health care and take bold action. We must work together, across industries and with governments and communities, to foster innovation and to drive more strategic investments that benefit us collectively.”

Following opening remarks from Aigboje Aig-Imoukhuede, Founder and Chair, African Initiative for Governance and Co -Chair, GBCHealth, during which he recognized the group’s collective goal to identify solutions for health and finance in Africa, H.E. Faure Gnassingbé, President, Togolese Republic, spoke about the healthcare situation in his country and the government’s approach to public-private partnerships.

“In Togo, we passed on the responsibility of certain facilities, namely clinics, pharmacies and hospices, to specific private entities who manage them,” said H.E. Faure Gnassingbé, President, Togolese Republic. “We’re proud to say that public facilities are as efficient as private facilities, so we have gone on to create another category of facilities that are semi-private, semi-public. We hope that, with this initiative, we’ll be able to reach another level of efficiency.”

Ray Chambers, WHO Ambassador for Global Strategy and Board Member, GBCHealth, spoke about the need to be creative in terms of stretching private sector capital for advancing health and economic growth. “I’m very concerned as we sit here today, but heartened by the title of this dialogue, called Africa’s Health & Finance,” he said during the discussion. “I don’t think going forward that we can separate health from finance.”

Halima Dangote, Executive Director of Dangote Industries Limited, daughter of Aliko Dangote, President, Dangote Group & Chairman, Aliko Dangote Foundation, delivered remarks on her father’s behalf. In them, he discussed his motivation as a businessman and human being for improving the wellbeing and quality of life for people in Africa.

Amina Mohammed, Deputy Secretary-General, United Nations, also joined the discussion. She spoke about the importance of unlocking and leveraging the tools the private sector has to deliver healthcare services through sustainable finance.

“Much of education and much of health is not in a bad place, it’s in crisis,” said Amina Mohammed, Deputy Secretary-General, United Nations. “People are faced with choiceless choices, for instance, having to choose health or water. We need solid institutions to be able to deliver services.”

Other leaders, all of whom brought unique perspective from their experiences in African governments, NGOs and the private sector, each highlighted the importance of financing healthcare and promoting collaboration between the public and private sectors in order to find sustainable solutions.

Chief Olusegun Obasanjo GCFR, Ph.D., Former President of the Republic of Nigeria noted that there is a saying that Health is Wealth but that the saying is inadequate because ‘health is everything including wealth.

Hon. Netumbo Nandi-Ndaitwah, Deputy Prime Minister and Minister of International Relations and Cooperation of the Republic of Namibia noted that a country can’t industrialize without a healthy society and that we must stop looking at healthcare as a charitable cause, but as a profitable business that should be encouraged.

Patrick Khulekani Dlamini, CEO and Managing Director, Development Bank of Southern Africa talked about the evolution of 2G to to 3G and now 4G on the continent saying that it is in Africa’s hand and reach to leverage technology to leapfrog some of its healthcare needs

The session, titled “Africa’s Health and Financing: Pathways to Economic Growth and Prosperity,” will inform revisions to the report ahead of its launch at the Africa Business: Health Forum in February 2019. Preliminary findings are summarized below and are available here.

“African businesses and governments are realizing that investing in Africa’s health is not only the right thing to do, but it’s also good for business and for government,” said Aigboje Aig-Imoukhuede, Founder and Chair, African Initiative for Governance and Co -Chair, GBCHealth. “If we’re able to galvanize a new era of cooperation and improve the overall well-being of this young, fast-growing continent, we’ll create economic growth for all Africans.”

“Africa’s population bulge and its abundance of young people is a competitive asset,” said Vera Songwe, Executive Secretary, UNECA. “This asset, however, must not become a fiscal burden by crowding in private finance to sustainably share the cost of a healthy Africa.”

Preliminary findings from the forthcoming report “Healthcare and Economic Growth in Africa” identify the importance of improving health to drive Africa’s economic growth and the need for the private sector to play a significant role in improving Africa’s health. Specifically, the report highlights: