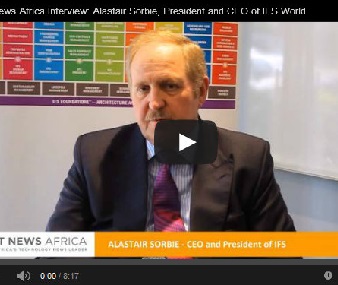 Alastair Sorbie is currently CEO and President of IFS, a position he has held since 2006. Sorbie joined the Swedish ERP solutions provider as managing director in 1997, when IFS entered the UK market.

During his time as IFS UK MD, Sorbie played an important role in IFS’s entry into project-based industries such as engineering, construction and defense. He instigated the development of solutions for these verticals and much of the growth of the UK group was due to his strategy of successfully penetrating such verticals, which are often considered being outside the crowded traditional manufacturing ERP market. In 1999 Sorbie’s responsibility for sales, service and support activities within the UK expanded with the creation of IFS South Africa, IFS Middle East and IFS Defence in 2000.

At the end of 2004, Sorbie’s remit was extended again to take in the Nordic and Continental Europe areas and he was promoted to run IFS’s EMEA regional operations. Following his success at leading the EMEA operation, Sorbie was the natural choice for the role of CEO and President, taking up the mantle in early 2006.

Throughout his career, Sorbie has developed and advanced his knowledge from end user Materials Management, via IT consultancy, into wider application software. He has been involved with ERP solutions since 1981 and has held senior management positions in a number of leading applications software product companies, including Pansophic Systems and Avalon Software.

In an exclusive interview with IT News Africa, Sorbie explains how IFS is targeting South Africa and the rest of Africa as a key growth market for the next few years. Some of the sectors include Mining, Oil & Gas, Construction / Infrastructure, Supply Chain / Logistics, Manufacturing to name but a few.