Telecommunications company Ericsson South Africa has dismissed an employee over a racists tweet.

Ericsson employee Vivienne Catherine Basson vented her anger on Twitter today, after being allegedly involved in a car accident with a taxi driver. In the rage-filled tweet she said, “Effing k**fir taxi. And once again I vote for the death penalty. These savages don’t deserve to live. But more importantly Daniel is alive and I am alive. They can rot in hell”.

In South Africa, the word “Kaffir” is regarded as a deeply offensive racial slur, similar to “Nigger” in the United States.

After reviewing the message posted on Twitter, Ericsson South Africa dismissed Basson, stating that she contravened the company’s Code of Business Ethics.

“As per our Ericsson Code of Business Ethics, we have a zero tolerance policy against all kinds of discrimination based on partiality or prejudice. In this case the Code has been breached, and as such the individual involved has been summarily dismissed,” they said in a statement.

In a number of follow-up tweets, Basson tried to justify her actions by explaining that she had previously been involved in two hit and run incidents with taxis and had been robbed and shot at in her home.

“Do you now understand my anger. Walk in my shoes before you pontificate. I am not racist but I do know the difference between a good person and a savage,” she later tweeted.

She did apologize for her initial tweet, stating that she didn’t want to be “insensitive or derogatory.”

Law firm Legal Aid warns of the dangers of posting entries to social networks, as it could have long-lasting effects on the poster’s career.
“Social media can be used to socialise and communicate and help do things, but you may not have thought about some of the problems it can cause for you. Think before you post – there may be negative consequences for you now as well as in the future as once it is out there it can be in many places you didn’t even think about. Remember friends can copy what you post and send it to people you don’t know who could then send it to even more people,” they explained. 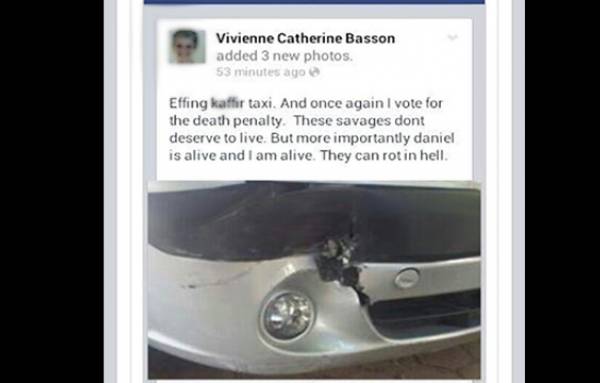