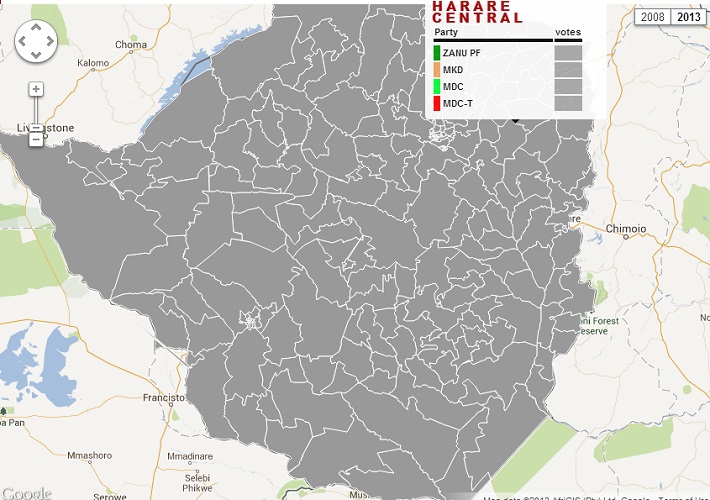 As the Zimbabwean elections draw to a close and vote counting starts across the Southern African nation, voters and citizens will be waiting with baited breath for the results to be made known.

But as citizens wait for the results, there are a number of online resources that can be utilized to stay on top of the latest news and view the election results as they are announced.

Zimbabwe’s previous election was marred by a large number of violent occurrences, and while the government promised that this election will be peaceful, the country still runs the risk of sporadic voter violence.

The interactive map on the home page of Zim Elections 2013 features a number of categories in which visitors can refine their search for incidents during the voting and results process. Categories such as Voting Environments, Media, Electoral Processes Updates and Infringements can be sourced on the map through Google Maps.

Users will also be able to filter their search to include images and photos from incidents and polling stations, as well as videos that other users might have uploaded. If users happen to see any irregularities, the website also has the functionality for users to report it.

The Ushahidi-powered crowd-sourced platform for Zimbabweans was created by Zimrights and serves as a mechanism through which to share incidents about “efficiency, good practices, violence, intimidation, coercion, breach of electoral regulations or anything significant to the electoral process.”

As the voting started last night and continues throughout the day, many Zimbabweans will be anxious for the official results to be made known. Fortunately, there are a number of online sources that will provide these results as they are made available.

Election Ride is an interactive website that allows users to click on a region in Zimbabwe and see the known results for that specific area. When clicking on a province, users will be shown a map with the districts in the province, where users can then source local and regional results.

The website covers the National elections, but also the Parliamentary and Senatorial races. Each candidate has their profile featured on the left-hand side of the map of Zimbabwe, with indicators on how many of the 210 constituencies they have won.

The website has also been optimized for mobile users – it makes use of a single page and users do not need to refresh their browser for new information to be displayed. Users of Election Ride can be sure that the results announced on the website are genuine results, as “in accordance with Zimbabwe’s Electoral Laws, electiOnride.com only displays results as published by the Zimbabwe Electoral Commission (ZEC).”

There is no functionality to report incidents.

Although hosted in South Africa, Simukai Election Results also provides a free service to host the election results. Although it is not an interactive website, it does feature a large map of Zimbabwe that is automatically updated with election results as they are made known.

The website is fairly basic, but users will be able to get access to Parliamentary and Senatorial as well as National results. One distinguishing feature of Simukai, which other websites do not have, is a live feed of election results as they are being counted.

However, as the site cautions, “The results presented here are not the official results, but reflect data gathered from polling station, ward and constituency returns. The % Poll reflected here is based on the entries on an Official Voters Roll obtained from ZEC, dated 27th May 2013.”

Sokwanele, which means ‘enough is enough’ in Ndebele, is one of the most detailed websites regarding the elections and the accompanying results. The websites host a myriad of information, which includes the party manifestoes, a number of election blogs, other useful election resources and information on previous elections.

In addition, Sokwanele hosts an incredibly detailed interactive map of all the regions in Zimbabwe, divided into the Presidential, House, Senate and Battleground sections. The default map gives a geographical overview of the results, but switching to the Table view, will allow users to see the individual constituencies with their results and voter turnout.

According to the website, they are “campaigning non-violently for freedom and democracy in Zimbabwe”.

Predominantly a new website, the online source features the election results through news articles and pieces relating the elections. While it does not have an interactive map or live updates on the results, it does commit to providing the latest news.

The site also features a link to the Change.org page, where they encouraged users to sign a petition to allow international observers to monitor this year’s general election. The petition only managed to gather 1 000 signatures.

Social media has proven to be incredibly important during elections, mass protests and rallies. The Zimbabwe elections are no different. While Zim Elections 2013 has an interactive website (highlighted above), it also has a Twitter account (@Zimelections13) for up-to-the-minute updates on results as they are known.

Doing a quick search on Twitter will reveal a host of other Twitter handles that will be able to provide users with the latest information, such as @sokwanele, @BBCAfrica, @ReutersAfrica and @CNBCAfrica.