In any large organisation you are likely to find someone in charge of the Information Technology; this is the Chief Information Officer (CIO). In the past, the CIO’s function was to “keep the lights on”, but the rapid rate of change in the IT marketplace has led to a sea change in the requirements for a successful CIO.

According to Stephen Murdoch, Vice President and General Manager, Large Enterprise Business Unit (EMEA) at Dell, as little as four years ago Dell was spending 92% of its $1 billion IT budget on maintenance. When so much of your available pool is being spent on simply maintaining what you’ve got, very little is left for innovation.

Now, many corporations are asking their CIO’s to raise the bar, switching their focus from control and management of what they currently have, to delivering efficient IT services. Efficiency needs to be the new benchmark.

What sets the successful CIO apart is his ability to use the IT function to create areas of profit for the company using technology. Cheene gives further insight into this idea, “It is a bit of an idealistic approach because different organisations will be at different stages of the growth of IT in their organisation. Some companies struggle to make sure the computers work every day, then the CIO needs to make sure the computers work and that’s not what he should be doing. In a more mature organisation the CIO needs to be finding new ways of helping the business make money.”

As the world recovers from the economic crisis, there are four key trends which CIO’s can take advantage of in their quest to innovate:

Virtualisation, in computing, is the creation of a virtual (rather than actual) version of something, such as a hardware platform, operating system, a storage device or network resources. Server virtualization is a particularly effective choice for streamlining IT spending. A single server can be used to run many “virtual” servers, thus eliminating the need for physical hardware for each server.

Cloud Computing is computation, software, data access, and storage services that do not require end-user knowledge of the physical location and configuration of the system that delivers the services. Parallels to this concept can be drawn with the electricity grid where end-users consume power resources without any necessary understanding of the component devices in the grid required to provide the service.

Mobility is provided by telephones and computers which can move around freely and be used from anywhere. Enabling employees to work anywhere, mobile computing has led to tremendous improvements in efficiency and flexibility.

These trends can help the savvy CIO simplify the complex nature of the IT environment. A CIO can choose to standardize, simplify and automate their IT infrastructure, or move to cloud computing handled by an off-site service provider. It is important, however, that the CIO balance innovation, value and agility.

With this in mind, let us have a look at the progress made in Africa towards IT efficiency.

While most of the global business community is enduring a sharp downturn in discretionary spending on IT, with cost control and value seeing increasing emphasis, IT expenditure in Africa shows no signs of contraction. 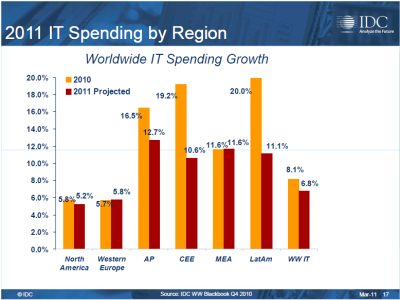 Furthermore, Africa’s anticipated IT spend for 2011 is the second highest in the world, and only a little behind the Asia Pacific region. A telling statistic, however, is the distribution of IT spending in Africa. 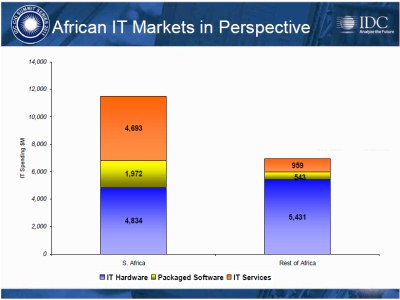 Of the $18.5 billion expected to be spent on IT in Africa in 2011, South Africa makes up a whopping 62%, or $11.5 b. Hardware and services constitute the majority of SA’s spend, with less than $2 billion being spent on packaged software. The contrast with the rest of the continent’s spend is stark. With only $7 billion being spent on IT in the entire African region, and 77% of that, $5.4 billion, is expected to be spent on new hardware.

Problems such as access to power and talent need to be addressed from the very beginning. While efficient infrastructure implementation can address the former, only education and experience can address the latter.

While Africa provides enormous opportunities in the IT market, the continent obviously has a long way to go before it can be considered to be “leapfrogging legacy technology” and heading straight for cutting-edge technology adoption. Africa’s market is still very young, and CIO’s need to focus on efficient deployment of IT now in order to maximize innovation and flexibility.