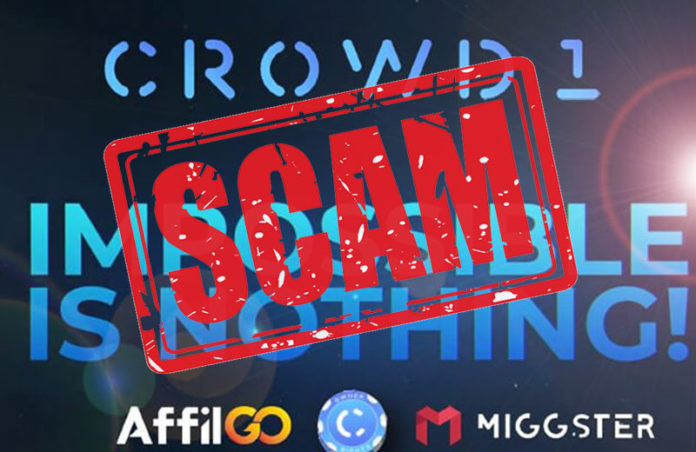 South African financial regulators have been taking a renewed critical look at Crowd1 – a  nebulous, highly controversial and popular Spanish (or Russian) company that claims to be a networking marketing firm, among other things. Crowd1 has already been banned in Namibia and the Philippines, and other countries, under suspicions of foul play.

Since last month, the South African Reserve Bank (SARB) Prudential Authority has been investigating Crowd1 – a part of what is known as Impact Crowd Technology Group. Looking specifically into whether or not the company is a deposit-taking organisation.

According to MoneyWeb, Crowd1 has vehemently denied allegations made against it that it is, in fact, a pyramid scheme. However, claims made by the Bank of Namibia suggest just that. The Bank claims that Crowd1 makes its money, presumably a vast amount of money, by getting existing members to sign up new members. Crowd1 claims instead it makes its revenue by selling “educational packages.”

The Prudential Authority says that it isn’t investigating whether or not these claims are true, but rather if the company is acting like a bank or financial services firm in taking and holding people’s money. The Authority, which governs banking in South Africa, says that it has “not issued any licence in terms of a financial sector law or in terms of the Financial Sector Regulation Act to Crowd1 for any financial product, financial service or market infrastructure provided.”

While the regulator has yet to specifically warn people of investing in Crowd1, it did say that investors should be wary of putting their faith and wealth in the hands of unregulated companies.

“The SARB has consistently warned members of the public against investing with unregulated entities and to remain vigilant through conducting due diligence assessments on any entity to make sure these entities and the products that they offer are authentic and registered with the relevant authorities,” the regulator says.

The FSCA, the regulator of financial service providers (FSPs) in South Africa, has issued a warning to protect the public against Crowd1, writes Business Live.

Once again reminding South Africans that Crowd1 is in no way a regulated FSP, and thus “not authorised to render the financial services it is providing” in SA. Further, FSCA warns that investing in unregulated FSPs like Crowd1 is potentially dangerous.

“Any investment or business opportunity that is offered to the SA public (that is not regulated by the Companies Act) must be offered by an authorised FSP,” the regulator says.

“While all investments hold risk, one with an unauthorised FSP should be considered extremely high risk. It is also often fraudulent in nature, and likely to lead to losses for customers, for which there is little or no recourse.”

Crowd1 flagged as a scheme by New Zealand, Norway, Paraguay, and others

BizNews reports that the company has been delisted in the direct selling news and market data website Business For Home, after authorities in several countries pegged it as fraudulent. Countries including New Zealand, Norway, the Philippines, Namibia, Paraguay and Mauritius.

Recently, famed players of the South African Springboks have had their likenesses used to advertise the company. Rugby players Eben Etzebeth, Duane Vermeulen and Jacques Potgieter, as well as singer Nicholis Louw and first Big Brother winner Ferdinand Rabe, have all apparently invested money in the company.

Springbok Jacques Potgieter told local Afrikaans newspaper Rapport that Crowd1 is “definitely not a scam, but also not an investment”. Potgieter would then go on to perfectly explain a pyramid scheme.

“You put your money in and recruit people under you. The idea is to get four people, who in turn get four more people and so on,” he is quoted by Rapport.

According to Investopedia, a pyramid scheme is “a sketchy and unsustainable business model, where a few top-level members recruit newer members, who pay upfront costs up the chain, to those who enrolled them. As newer members in turn recruit underlings of their own, a portion of the subsequent fees they receive is also kicked up the chain.”

A prominent investor consulting on the Rapport article has since been accosted on social media for his claims. Warning people to stay away. He told Rapport that the scheme is “merely a cellphone version of the same old pyramid scheme recipe with which South Africans have been caught many times over,” and that it only seemed legitimate because it runs on a smartphone app.

The Crowd1 crowd didn't like my comments about them in Rapport on Sunday. Now both Brenthurst and Rapport websites/Facebook pages being crowd bombed with nasty stuff today. Still doesn't change the fact: it still smells like a pyramid scheme.

Despite all these claims to the contrary, Crowd1 users continue to defend the platform, probably because it suits them.

YouTube user Esther Mofrey uploaded a 24-minute video in January titled “CROWD1 is LEGIT Not a SCAM /This is The PROOF.” In the description of the video, she links her personal Crowd1 sign up portal and in the video itself claims that people should only invest in Crowd1 through being recruited by “trustworthy, knowledgable people.”

Esther is not the only alleged Crowd1 user to support the company. Across social media, from Twitter to Instagram, there are multitudes of users claiming the benefits of the service. Always linking the same details of the services Crowd1 offers, which usually reads as a word salad. Claims about offered products without actually ever telling you what those products are, etc.

Most of these users want others to sign up to the service via their own links, in order to make a profit and keep the money rolling up the pyramid slopes.