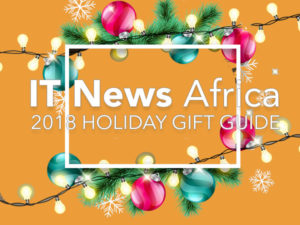 As Christmas draws near, so does the slowly building pressure to buy the perfect presents for your friends and family. The tech space is also so dense and hard to navigate sometimes that it can be daunting finding the right gift for the technophiles in your life. Breaking it down into smaller categories makes it easier to pinpoint an area of interest and picking out a present that will feel just right.

IT News Africa has put together an official Holiday Gift Guide to help you pick out the perfect gifts for your techie loved ones this festive season.

2018 saw some of the best gaming releases of the last five years, in terms of both games and consoles. This year’s top consoles were the likes of the Sony PlayStation 4 Pro, Microsoft Xbox One X, and Nintendo Switch. There’s also the highly anticipated PlayStation Classic, a wonderful throwback to the original PlayStation experience.

The PlayStation 4 Pro is one of the most sought-after consoles of the year. Sony’s long history of making gaming consoles certainly pays off when you look how far we’ve come from the original PlayStation. It features 1TB of storage, 8GB GDDR5 + 1GB of memory, 4K resolution, Blu-ray and DVD compatibility, and has VR support.

The Xbox One X console is Microsoft’s most powerful gaming console to date. It really brings 4K gaming to life and manages to easily improve the 1080p experience. The console features an eight-core CPU, clocked at 2.3GHz, alongside 12GB of GDDR5 RAM, GPU clocked at 1172MHz, and a built-in 4K Blu-ray player with support for Dolby Atmos.

The Nintendo Switch is widely regarded as a phenomenal family console. It lets you play whenever, wherever you want with the options to play on either handheld or console. It also boasts a selection of tremendously fun games that can be enjoyed alone or in groups, like Super Mario Party, The Legend of Zelda: Breath of the Wild, Pokémon: Let’s Go, or something a little bit different like Nintendo Labo suite of games and constructible props. It really has something for everyone.

Block out the world with the Sennheiser HD 4.50 BTNC Wireless headphones. These wireless headphones are comfortable and have great audio quality that will let you get lost in your tunes for longer. They let you plug in the headphones when the battery is dead or connect to a nonwireless source and are easy to control. The 4.50 BTNC has a battery life of up to 25 hours on a charge but can still be boosted with a portable charger via the micro-USB port.

The Beats Studio3 Wireless is a snazzy pair of headphones with gold accents. It comes with Pure Adaptive Noise Canceling technology, up to 22 hours of battery life, and lets you take calls, control music, and activate Siri with multifunction on-ear controls. The Beats Studio3 are also comfortable over long periods of wear and come with a carrying case so you can safely stow them away when you’re not quietly jamming out to yourself.

Sony really hit the mark with their ultra comfortable WH-1000XM3 headphones. These wireless headphones feature superb noise-cancelling capabilities and a nifty ‘Quick Attention’ mode where you hold your hand over the earcup to bring down the volume of your music to let in outside noise. There are a number of other gestures you can do on the touch-sensitive panel of the earcup that make for a very futuristic listening experience.

Samsung revolutionised the selfie game with its Galaxy Note 9. The clickable stylus or Bluetooth enabled S Pen, that doubles as a remote control allows you to take pictures from a distance.

On top of that, the phone is capable of wireless charging, comes with up to 512GB of expandable storage, and lets you make digital transactions with Samsung Pay.

The Huawei Mate 20 has a simple but powerful photography setup with its one flash and Leica Triple Camera. It’s made of 3D glass with smooth curves and seams that fit comfortably into your hand. It comes with great battery life, traditional fingerprint sensor, stellar audio and visual media experience, and actually has a 3.5mm headphone jack, unlike a number of its competitors.

The Sony Xperia XZ2 is a standout in its own simplistic way. Capable of recording 4K HDR footage, the Xperia XZ2 is a great phone option for budding videographers. It can go a full day on a single charge, has great sound quality, and a Dynamic Vibration System that makes for a more immersive smartphone gaming experience. It’s a solid phone with a noticeable heft compared to some of its competitors, but its sleek design and smaller bezels than previous iterations give it an understated kind of beauty.

The Huawei MediaPad T5 is Huawei’s latest in tablet offerings. Its audio really packs a punch and video quality makes for a really fun and immersive viewing experience. It features a 10.1-inch Full HD IPS screen, an 8-core high-speed processor, 2GB RAM, and 16GB of storage space. You could even increase this storage space to a much more impressive 256GB with a MicroSD card. Huawei has also placed an emphasis on catering to the kids on this device with a “Kids Corner” feature, offering up a safe place for kids to browse and play.

The HP ENVY x2 is more than just a tablet. It’s actually a detachable convertible PC, so it gives you the portability of a tablet with the functionality of a laptop. It’s a nifty little device thanks to its 4G LTE connectivity and a battery life of up to 22 hours. As one of Intel’s Always Connected PCs, it frees you of your Wifi and hotspot dependency so you can stay connected wherever you are.

The iPad Pro family of devices is famously sleek and powerful. It’s powerful, in fact, that many have dubbed it “an iOS MacBook.” It is, however, cheaper than the newest MacBooks and a lot more portable, especially when you add the Smart Keyboard Folio. Pair it with a design application like Procreate and the Apple Pencil and you’ve got yourself an artist’s happy place. It really isn’t a crazy idea to just switch over from a MacBook to an iPad Pro with only a few considerations to take into account.

Fitbit is a universal name in the health tracker and fitness wearables world. The Fitbit Versa is just the same. Although classed as a smartwatch, it still has the same tracking functionality as Fitbit’s other devices, but with the added benefit of being able to use Fitbit Pay, which allows you to pay at accepted contactless payment terminals by just using your Fitbit smartwatch.

An impressive four-day battery life. The look and feel of a classic wristwatch. Sensors that auto-detect 6 of 39 exercises. Waterproof down to 50 meters. The Samsung Galaxy Watch makes for a stellar wearable experience. If you own a Samsung phone and are looking for the best smartwatch to pair it with, the Samsung Galaxy Watch should be at the top your list.

Ah, the Apple Watch series. They’re so sleek and fancy, who could resist? The Apple Watch is a great iOS companion, especially paired with Siri who is still smarter than most personal assistants. The Apple Watch 4 is still one of the more expensive smartwatches out there, but it comes with health features exclusive to the Apple Watch like electrocardiogram (ECG) and fall detection features. Its main draw is still its really pleasing, sleek design though.