Developed by Cyanide Studios and published by Focus Home Interactive, Call of Cthulhu is a survival horror RPG based on the work of H.P. Lovecraft of the same name. Available on PlayStation 4, Xbox One and Windows, it drops you straight into a world where the old gods are worshipped in secret and the madness consumes you slowly.

Set in 1924, the story follows Edward Pierce, an alcoholic private investigator going through an existential crisis and without any cases to work on. When presented with the mysterious case of the Hawkins family death on Darkwater Island near Boston, Massachusetts, Pierce leaps at the opportunity to solve the mystery of their death. During his investigation, he uncovers more than he bargains for, finding that a cult is trying to revive an old god, the Great Old One… Cthulhu. 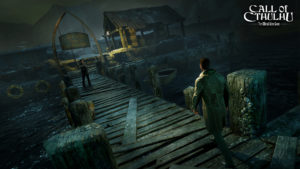 It’s important to note that Call of Cthulhu is based on the tabletop RPG of the same name and not entirely on the Lovecraft novel. This left room for developers to tweak the narrative and use elements from the tabletop without making it a true recreation of the book or the game. The gameplay was, however, reminiscent of other first-person horrors like Amnesia: The Dark Descent and Outlast, but where it could have been truly, terrifyingly immersive, it was clunky and at times more confusing than compelling. Everything from the controls to the plot and dialogue is stiff and awkward. Character interactions more often than not felt like they just weren’t driving the story forward or like questions were squeezed into dialogue to fill up space and extend play time.

As far as horror games go, it didn’t send my heart racing nearly as much as I expected. In fact, it offered far more in the way of mild anxiety than it did fear, especially in terms of the loud unsettling music playing when the atmosphere didn’t call for it. The ambience was delightfully eerie though, only hindered by the motion blur from moving around. The gore and handful of surprise scares were the only things that even brought it close to its intended genre, but it sadly missed the mark by a pretty long shot. It made up for it with a lingering gothic vibe that everyone can appreciate.

The RPG elements and mechanics are strong. Levelling up different skills customise the player experience and factor into some of the choices you can make in given situations. A higher Investigation skill lets you better investigate a crime scene, Eloquence opens up dialogue options, and Strength is handy when you need brute force. Ignorance in this game is also truly bliss, because the more you learn of the occult, the deeper you fall into madness. Similarly, the more you drink the crazier you get and the more your sanity drops, the more you’re plagued by otherworldly visions and entities that torment you. Despite these few options to shake things up, the narrative feels quite linear no matter what “unique” choices you make.

Call of Cthulhu has an identity crisis because it doesn’t seem to know which genre it fits into. It also isn’t the Lovecraftian experience anyone was hoping for. For a game that’s been in development since 2014, it leaves a lot to be desired, but if you look beyond its flaws and appreciate it for what it is, a creepy detective game with elements of psychological horror, it can be quite an enjoyable way to pass the time.

A lot of the game felt like it was an afterthought. If there were a stronger plot and more focus placed on smaller details like movement, character development, and that one terrible shooting scene, it would’ve been a better game. Overall, it needed more Cthulu.