After a robbery gone wrong, the Van der Linde gang have to flee from the town of Blackwater with hefty bounties on all of their heads and trek through snowy mountain terrain to find safety. This becomes a regular occurrence in the game as the gang moves from campsite to campsite in an attempt to avoid agents from the Pinkerton Detective Agency. An ongoing feud between gang leaders Dutch Van der Linde and Colm O’driscoll also adds to the everpresent loom of trouble, because members of this rival gang can be encountered at any time and around any corner. 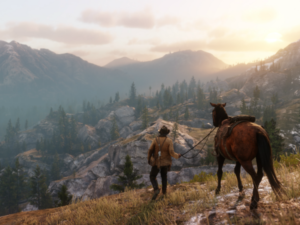 The milieu of the old West is an idyllic setting in contrast to the violent attitudes of both the citizens and the outlaws. It makes the day to day of Arthur’s comings and goings more interesting when simply bumping into someone in one of the many small Western towns could open up the dialogue for a confrontation. This and the need to commit crimes to keep the gang afloat adds a level of difficulty to the gameplay, essentially forcing you to behave in social situations so as not to compromise the gang, but there will always the option to throw caution to the wind and kill everyone in sight.

The rich variety of landscapes allows for so much exploration and everything is rendered to perfection, from the tips of snow-capped mountains to the blades of grass that your horse treads on. Adding to an overall spectacular setting is a seamless day and night cycle that adds atmosphere to those long horse rides. You could go exploring in the light of the moon or quite literally go riding off into the sunset. Early mornings are a personal favorite of mine because of the way the sunlight falls onto the trees and bodies of water that reflect the light back. There’s also the weather system that brings snow, rain and heavy winds into the mix that you might find yourself fighting through.

Arthur and many of his friends grapple with the fact that their way of life is being killed off by the progress and societal attitude change brought on by the Industrial Revolution towards the end of the 19th century. The world around them is rapidly modernizing and there seems to be no more room for outlaws like them in it, but they don’t plan on going down without a fight. 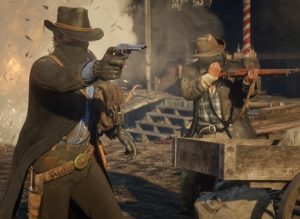 Some of the features developers have added to this new rendition of the Red Dead series add an element of realism to the game. Things like doing chores around camp, maintaining your weapons, and taking care of your horse either make the game more interactive or tedious, depending on the player. Interactions with your horse make an especially big difference since taking care of it helps to build a stronger bond, but sometimes interactions like brushing and feeding really do become chores when you’re travelling for an especially long stretch.

In lieu of that, doing these kinds of tasks takes time and this is where the game’s biggest flaw is revealed. The pacing is incredibly slow. Not only does it take almost a whole half hour to get through just the intro, but it also continues to drag like that for several chapters. The main storyline chugs along slowly enough for you to seek out other distractions in the open world, but getting to them and actually executing an action can also take way too much time. It doesn’t help that Arthur’s general movement feels sluggish and even a little bit wonky. It takes some effort to turn his walk into a sprint and then it takes patience to watch him interact with anything around him. While there is a benefit to slowing things down just a little bit, like helping the player focus on key points in a story to make it more impactful for example, you’re not doing anyone any favors by making a scene fifteen minutes long if it could just as easily be done in ten or even five.

While it can be slow, Rockstar has taken this title to a completely new level on interactivity. It’s now possible to interact with every person you see by either “greeting” or “antagonising” them. Sometimes these interactions trigger a mission, sometimes they simply trigger a fight, it all depends on a person’s playstyle and whether they want to be considered honourable or not.

Committing crimes is both more interesting and rewarding. Robbing homesteads is a new option in addition to familiar actions like robbing people by gunpoint, stores, and trains. The hunting mechanic is also more intuitive with the ability to better track a target and kill it quietly. Fishing is also an addition to the game that fans were weirdly excited about. I guess you could say it offers some respite from the rest of the game’s turbulent atmosphere.

Conclusion
Red Dead Redemption 2 is Rockstar’s magnum opus. It is without a doubt a masterpiece of visuals, storytelling, and interactivity. It’s the kind of game you can get lost in for days on end by simply exploring the immense map and taking part in all of the lesser missions and interactions that you may not come across during the main questline. The customizability of yourself and your horse adds a personal touch to the experience and really lets you as a player make the game your own.