The smart companion was developed following research and focus groups conducted by Soul City, in which it interviewed victims of domestic violence to better understand how they seek help. It can be accessed 24/7 via Facebook Messenger, and provides a safe space for domestic violence victims to access information about their rights, support options, and where they can find help – in friendly, simple language.

rAInbow is completely anonymous and already has more than 2000 users. Because of its AI technology, it gets smarter and better versed with elements such as cultural sensitivity the more people use it.

According to the Sage Foundation, South Africa has the highest reported rate of femicide in the world and that women will typically suffer up to 30 incidents of abuse before they seek help.

“We know that loneliness and isolation really come out in domestic violence, people are really quiet about it, they don’t want to talk about it and they don’t want to share what they’ve been through. With rAInbow there’s no shame, there’s not judgement and there’s no stigma – it’s a machine. We hope that this amazing piece of technology will really start these conversations across South Africa,” says Debbie Wall, vice president at the Sage Foundation.

While rAInbow does not pretend to ‘be human’, the blend of conversational language with a familiar technology makes it feel as informal and relaxed as speaking to a friend. Users do not need to share their personal information, download an app, or access a separate website to use the free service. Any information they users share with rAInbow will be anonymous and strictly confidential. 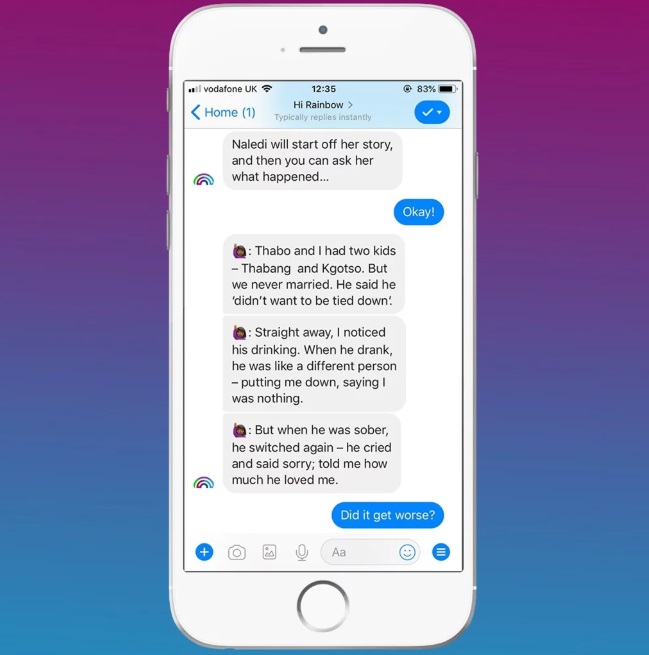 “We expect rAInbow to give us insights that can lead to social and governance reform, which can significantly contribute to ongoing change and improved safety of women in society. More people are realising the potential of exponential technologies and innovation to solve social challenges. rAInbow is a new approach to an old problem and our hope is that it will make it easy for people to get help,” says Kriti Sharma, AI lead at Sage and founder of AI for Good.

“rAInbow is friendly, reassuring, and will never judge or tell victims what to do or put them at risk. Rather, it will provide useful information and guidance, and encourage victims to seek support from their friends and family. The stories that rAInbow tells is an effective way to inform victims about their rights and options. Stories have been shared for generations, to pass on knowledge and learning. As effective as stories are in teaching us to love and respect one another, they are as effective in teaching us that domestic violence is not ok.” says Sharma.